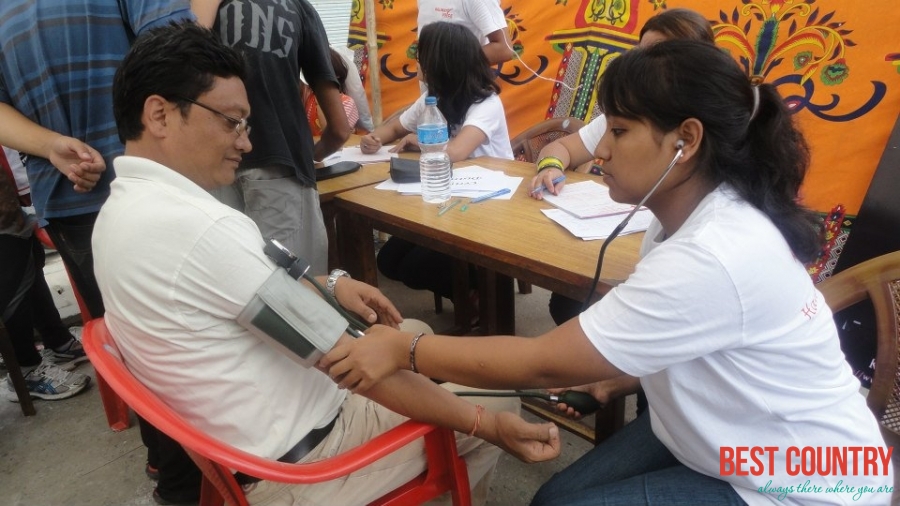 Health care services in Nepal are provided by both the public and private sector and fare poorly by international standards.

Based on WHO data, Nepal ranked 139th in life expectancy in 2010 with the average Nepalese living to 65.8 years. Disease prevalence is higher in Nepal than it is in other South Asian countries, especially in rural areas.

In spite of those figures, some improvements in health care have been made, most notably significant progress in maternal-child health. For example, Nepal’s Human Development Index (HDI) was 0.504 in 2002, ranking Nepal 140 out of 177 countries, up from 0.291 in 1975.

In 2002, government funding for health matters was approximately US$2.30 per person. Approximately 70% of health expenditures came from out-of-pocket contributions. Government allocation for health care was around 5.8% of the budget for 2009.

In 2012, the Nepalese government decided to launch a pilot program on universal health insurance in five districts of the country.

Health care facilities, hygiene, nutrition and sanitation in Nepal are of poor quality, particularly in the rural areas. Despite that, it is still beyond the means of most Nepalese. Provision of health care services are constrained by inadequate government funding.

The poor and excluded have limited access to basic health care due to its high costs and low availability. The demand for health services is further lowered by the lack of health education. Reproductive health care is neglected, putting women at a disadvantage. In its 2009 human development report, UN highlighted a growing social problem in Nepal.

Individuals who lack a citizenship are marginalized and are denied access to government welfare benefits.Traditional beliefs have also been shown to play a significant role in the spread of disease in Nepal.

These problems have led many governmental and nongovernmental organizations (NGOs) to implement communication programs encouraging people to engage in healthy behavior such as family planning, contraceptive use, and spousal communication, safe motherhood practices, and use of skilled birth attendants during delivery and practice of immediate breastfeeding.

In June 2011, the United Nations Population Fund released a report on The State of the World's Midwifery. It contained new data on the midwifery workforce and policies relating to newborn and maternal mortality for 58 countries.

The aim of this report is to highlight ways in which the Millennium Development Goals can be achieved, particularly Goal 4 – reduce child mortality and Goal 5 – improve maternal health. In Nepal, the number of midwives per 1,000 live births is 4 and the lifetime risk of death for pregnant women 1 in 80.