Lebanese cuisine includes an abundance of starches, whole grain, fruits, vegetables, fresh fish and seafood; animal fats are consumed sparingly. Poultry is eaten more often than red meat. When red meat is eaten it is usually lamb on the coast, and goat meat in the mountain regions. It also includes copious amounts of garlic and olive oil, often seasoned by lemon juice.; olive oil, herbs, garlic and lemon are typical flavors found in the Lebanese diet. 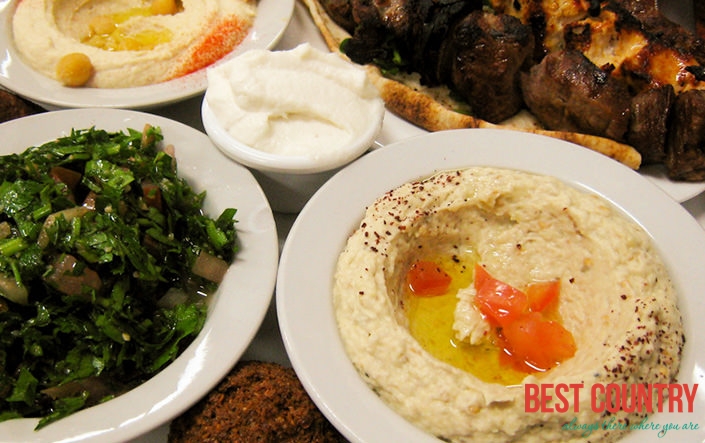 Most often foods are either grilled, baked or sautted in olive oil; butter or cream is rarely used other than in a few desserts. Vegetables are often eaten raw or pickled as well as cooked. Herbs and spices are used and the freshness of ingredients is important. Like most Mediterranean countries, much of what the Lebanese eat is dictated by the seasons.

In Lebanon, very rarely are drinks served without being accompanied by food. Similar to the tapas of Spain, mezeluri of Romania, and antipasto of Italy, mezze is an array of small dishes placed before the guests creating an array of colors, flavors, textures and aromas. This style of serving food is less a part of family life than it is of entertaining and cafes. Mezze may be as simple as pickled vegetables or raw vegetables, hummus, baba ghanouj and bread, or it may become an entire meal consisting of grilled marinated seafood, skewered meats, a variety of cooked and raw salads and an arrangement of desserts.

Although simple fresh fruits are often served towards the end of a Lebanese meal, there is also dessert, such as baklava and coffee. Although baklava is the most internationally known dessert, there is a great variety of Lebanese desserts.

A typical mezze will consist of an elaborate variety of thirty hot and cold dishes and may include:

Salads such as the tabbouleh and fattoush, together with dip such as hummus, baba ghanoush or moutabal, and kebbeh.

Some patties such as the Sambusac.

Family cuisine offers also a range of dishes, such as stews or yakhnehs, which can be cooked in many forms depending on the ingredients used and are usually served with meat and rice vermicelli.

The Lebanese flat bread is a staple to every Lebanese meal and can be used to replace the usage of the fork.

Arak, an anise-flavored liqueur, is the Lebanese national alcoholic drink and is usually served with the traditional convivial Lebanese meals. Another drink is Lebanese wine.

Pastries such as baklava, Kaak, Sfouf and Maamoul.

The Lebanese roasted nuts with variety and mixes.

Some dishes are also specifically prepared on special occasions: the meghli dessert, for instance is served to celebrate a newborn baby in the family.