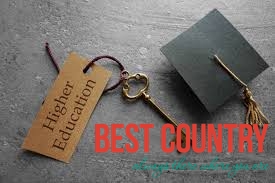 Education in Lebanon is regulated by the Ministry of Education and Higher Education (MOEHE). In Lebanon, English or French with Arabic are taught from early years in schools. After primary education, English or French become the mandatory medium of instruction for mathematics and science for all schools.Education is compulsory from age 6 to age 14.

According to a 2013 World Economic Forum report, Lebanon is ranked 10th in overall quality of education, and 4th in science and math, These rankings are based on the Executive Opinion Survey, carried out as part of the WEF's Global Competitiveness Report, based on polling a sample of business leaders in each respective country. In 2014, the country ranked second in MENA (behind qatar) in terms of quality of primary education and net enrollment rate. Lebanon's adult and youth literacy rates rank among the highest in the MENA region.

The goal of pre-school education is 1) to create a favorable climate for the children to communicate with others, 2) to develop their physical capacities, limb control and coordination of their movements, and 3) to educate their senses. Pre-school education also takes into account physiological moral and intellectual development of children. According to the World Bank database, private enrollment share for pre-school education is 80.3 percent in 2008.

According to the World Bank database, gross enrollment rate of intermediate level is 83.2 percent for male, 90.7 percent for female, and 86.9 percent for total in 2007. (The World Bank Edstats) Primary completion rate of Lebanon (US$6,000 GNI per capita in 2007) is lower than that of Tunisia, Jordan, Iran, Algeria, West Bank and Egypt (all of which have lower GNI per capita).

School operated by UNRWA partially offset the absence of available educational opportunities at the secondary school level. (UNRWA website) According to the World Bank database, gross enrollment rate of secondary education is 69.8 percent for male, 80.2 percent for female, and 74.9 percent for total.

Female students are seen in every university program or field of specialization.

While the Lebanese educational system offers a high quality education, many of the young people it graduates tend to leave the country to work abroad; An overwhelming majority of emigrants (77%) between 2004 and 2009 were young people under 35 years, many of whom are well-educated and highly skilled professionals (44% of those who emigrated held university degrees), which exacerbates the loss to Lebanon in terms of economic and social advancement. Another key statistic is the youth unemployment rate in Lebanon which has reached 24%.

Unemployment rates are particularly high among highly skilled people, specifically university-educated individuals, who typically spend more than a year after graduation looking for a decent job in Lebanon, and then decide to leave after either not finding any employment or refusing to take a job which is well-below their qualifications.Although the higher education system in Lebanon is highly developed, some of the issues that characterize it are particularly salient to the youth unemployment problem since this system is directly responsible for preparing a majority of the Lebanese youth for the labor market.

With university graduates making up 30% of people seeking a job, it is clear that the Higher Education system needs to play a key role in resolving the problem of youth unemployment in Lebanon.

The key issue related to this sector is the mismatch between the highly skilled graduates that universities supply and the skills and professionals the labor market demands; these supply-demand failings in the labor market are increasingly preventing young people from finding a job in their country that fits their qualifications.

In order to address these issues, universities can implement policies to: 1. Reform the curricula to better prepare graduates for their professional life 2. Improve career guidance structures and activities 3. Invest in relevant research, statistics and data gathering.

Lebanon has 41 nationally accredited universities, several of which are internationally recognized. The American University of Beirut (AUB) and the Université Saint-Joseph (USJ) were the first Anglophone and the first Francophone universities to open in Lebanon respectively. The forty-one universities, both public and private, largely operate in French, or English as these are the most widely used foreign languages in Lebanon.

At the English universities, students who have graduated from an American-style high school program enter at the freshman level to earn their baccalaureate equivalence from the Lebanese Ministry of Higher Education. This qualifies them to continue studying at the higher levels.

Such students are required to have already taken the SAT I and the SAT II (Subjects Test) upon applying to college, in lieu of the official exams. On the other hand, students who have graduated from a school that follows the Lebanese educational system are directly admitted to the sophomore year. These students are still required to take the SAT I, but not the SAT II.

In addition, some students choose to study abroad. The United Nations assigned Lebanon an Education Index of 0.84 in 2005.

In case they obtain an equivalence from the Ministry of Education and higher Education, they are admitted as sophomore students. As for the Lebanese University, which is the only public higher educational institution in Lebanon, students are admitted to undergraduate programs based on their Baccalaureate II.

A number of Faculties at the Lebanese University, such as the Faculty of Sciences require further testing for selectivity based on entrance tests (concurs) prepared and administered by this faculty.