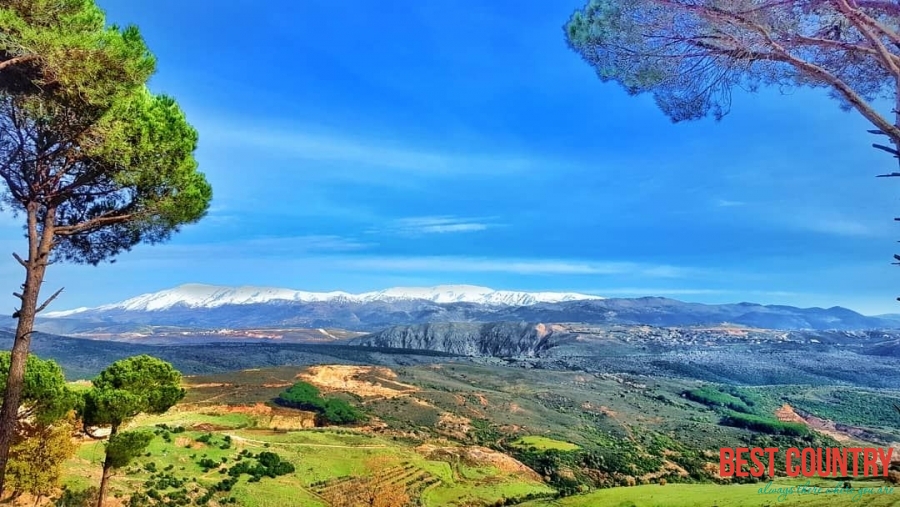 Lebanon has a Mediterranean climate characterized by a long, hot, and dry summer, and cool, rainy winter. Fall is a transitional season with a gradual lowering of temperature and little rain; spring occurs when the winter rains cause the vegetation to revive.

Topographical variation creates local modifications of the basic climatic pattern. Along the coast, summers are hot and humid, with little or no rain. Heavy dews form, which are beneficial to agriculture. The daily range of temperature is not wide. A west wind provides relief during the afternoon and evening; at night the wind direction is reversed, blowing from the land out to sea.

The amount of rainfall varies greatly from one year to another. Occasionally, there are frosts during the winter, and about once every fifteen years a light powdering of snow falls as far south as Beirut. A hot wind blowing from the Egyptian desert called the khamsin (Arabic for "fifty"), may provide a warming trend during the fall, but more often occurs during the spring.

Bitterly cold winds may have come from Europe. Along the coast the proximity to the sea provides a moderating influence on the climate, making the range of temperatures narrower than it is inland, but the temperatures are cooler in the northern parts of the coast where there is also more rain.

In the Lebanon Mountains the gradual increase in altitude produces colder winters with more precipitation and snow. The summers have a wider daily range of temperatures and less humidity. In the winter, frosts are frequent and snows heavy; in fact, snow covers the highest peaks for much of the year.

In the summer, temperatures may rise as high during the daytime as they do along the coast, but they fall far lower at night. Inhabitants of the coastal cities, as well as visitors, seek refuge from the oppressive humidity of the coast by spending much of the summer in the mountains, where numerous summer resorts are located.

Both the khamsin and the north winter wind are felt in the Lebanon Mountains. The influence of the Mediterranean Sea is abated by the altitude and, although the precipitation is even higher than it is along the coast, the range of temperatures is wider and the winters are more severe.

The Biqa Valley and the Anti-Lebanon Mountains are shielded from the influence of the sea by the Lebanon Mountains. The result is considerably less precipitation and humidity and a wider variation in daily and yearly temperatures. The khamsin does not occur in the Biqa Valley, but the north winter wind is so severe that the inhabitants say it can "break nails."

Despite the relatively low altitude of the Biqa Valley (the highest point of which, near Baalbek, is only 1,100 meters or 3,609 feet) more snow falls there than at comparable altitudes west of the Lebanon Mountains.

Because of their altitudes, the Anti-Lebanon Mountains receive more precipitation than the Biqa Valley, despite their remoteness from maritime influences. Much of this precipitation appears as snow, and the peaks of the Anti-Lebanon, like those of the Lebanon Mountains, are snow-covered for much of the year. Temperatures are cooler than in the Biqa Valley.

The Biqa Valley is watered by two rivers that rise in the watershed near Baalbek: the Orontes flowing north (in Arabic it is called Nahr al Asi, "the Rebel River", because this direction is unusual), and the Litani flowing south into the hill region of the southern Biqa Valley, where it makes an abrupt turn to the west in southern Lebanon and is thereafter called the Al Qasmiyah River.

The Orontes continues to flow north into Syria and eventually reaches the Mediterranean in Turkey. Its waters, for much of its course, flow through a channel considerably lower than the surface of the ground. The Nahr Barada, which waters Damascus, has as its source a spring in the Anti-Lebanon Mountains.

Smaller springs and streams serve as tributaries to the principal rivers. Because the rivers and streams have such steep gradients and are so fast moving, they are erosive instead of depository in nature. This process is aided by the soft character of the limestone that composes much of the mountains, the steep slopes of the mountains, and the heavy rainstorms.

The only permanent lake is Buhayrat al Qirawn, about ten kilometers east of Jezzine. There is one seasonal lake, fed by springs, on the eastern slopes of the Lebanon Mountains near Yammunah, about 40 kilometres (25 mi) southeast of Tripoli.