Iranians are mostly Muslims and celebrate the New Year on the first day of their spring.

There festivals known as Noruz or Nowruz and falls on the 21 March according to the Gregorian calendar.

The first month is known as Favardin and Noruz falls on this day.

They know when the New Year is upon them as in each town and village a cannon is sounded at the precise moment until it is heard they don't start their celebrations. They prepare for several weeks before hand.

In preparing they have to grow grains of wheat, barley or lentils to use as decorations for their houses. This decoration is a symbol for growth and prosperity and must be kept in the house for thirteen day after which it is thrown into the river.

They clean their houses during the days leading up to the New Year and they either make or buy new clothes for themselves and their family. If they cannot afford to much they try to have at least one piece of new clothing often a pair of shoes. 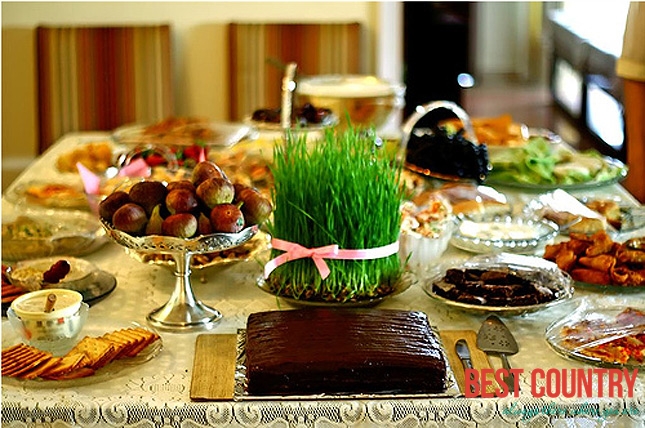 A special table is set up with seven articles which all must begin with the letter "s" for Haft-sin. They are:

Samanoo - a sweet pudding made of green wheat

Other objects are a bowl of colored eggs, candles, a mirror and a bowl of rose water.They also must have a copy of their holy book the Koran, on the New Year table.

After the cannon have sounded people visit their relatives to wish them a happy New Year. The elders give the younger ones a silver or gold coin this is known as aidi.

Everyone then gathers around the New Year table for a special feast, which includes traditional dishes such as Baklava, Nune Shekari which is a sugar biscuits and Badam Choragi which is are almond biscuits.

In Persia now Iran people used to exchange eggs as gifts on New Year's Day, to suggest the idea of new life beginning.

A few weeks before the Iran New Year, people put grains of wheat or barley in a little dish to grow. By the time New Year arrives the grains have produced shoots. This is done to remind people of spring and a new year of life.

Some people in Iran light fires at New Year and jump over them. This is done in hope that they receive good luck.