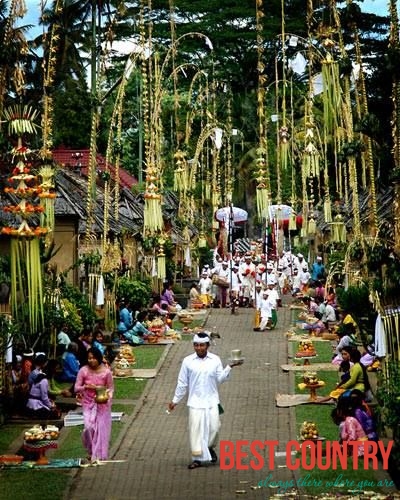 Religion is an important part of Indonesia. The religious influence on political, cultural and economical life is immense and not to be taken lightly.

Most of the great monotheistic world religions are present, and also a number of "primitive" religions and beliefs among the not-so-civilized cultures in Kalimantan, Irian Jaya and so forth.

There are some specialized strains of religious beliefs among some communities in Java, Bali, Sumatra as well, but the religions presented here will focus on the more known and wide spread variants: Islam, Christianity (Catholicism, Protestantism), Hinduism and Buddhism.

It is widely thought that Islam came to the northern tip of Sumatra sometimes during the 12th century and spread south and east until it had conquered the whole of the Indonesian archipelago.

It it supposed to have come with muslim merchant trading with the courts on the long coastline. Therefore it became a trading religion, as opposed to the traditional hindu-buddistic religion adhered to by kings and princes.

It was not until Islam came in to the inland courts on Java that the religion started to spread with some speed. At the end of 14th century all kingdoms on Java was muslim and the remaining hindu kingdom fled to Bali.

Today, the most hard-core of the indonesian muslims lives in Aceh, the northern tip of Sumatra, where Islam is said to first take hold.

They have always been fierce fighters, giving both the Dutch and the Indonesian state a hard time. Aceh strived for a long time for an independent Islamic state and has today a special status.

Going further south to Java the biggest islamic organisation today is Nadhlatul Ulama, NU. Their version on islam is a more relaxed one, building on traditional values as much an the Islamic scriptures.

Generally, Islam was a important political force during the dawn of nationalism from around 1900. One of the most important movement at that time was the modernistic Muhammadiyah established in 1912.

The modernistic school wanted to purify Islam from local tradition (adat) and return to the original source of Islam, the Quran and the Hadith or Sunnah. They also wanted to modernize the Islamic world, often with ideas from western science.

Muhammadiyah took on its at first small shoulders to work in the modernist direction, but met resistence everywhere. It was not until 1925 when the chief of the Minangkabau on Sumatra recognized Muhammadiyah that the organisation grew, but then it almost exploded. In 1935 it had 250 000 members.

During both Sukarno and Suharto, the demand of a Islamic Indonesian state has been thoroughly subdued, even though some outbursts of violence has occured from time to time. Today, the situation is at best unstable.

During the demonstrations from 1997 and up until Suhartos resignation, a lot of violence has occured, mostly against the Chinese (being a double threat, religious and economical), and the state didn't react until the state itself was threatened, and then it was to late.

The demonstrations had grown from beating of Chinese to an general uprising against the appalling situation facing many of the Indonesians today.

So, Islam is still a political force today, even though politics in Indonesia takes mysterious ways...

The Dutch is the obvious reason for the introduction of Christianity in the Indonesian archipelago, and the Portugese has had a strong influence in East Timor. Other than that, there is really no reason for anyone to have become Christian in Indonesia. The introduction of a religion must travel with its followers, and the behaviour of the Dutch in their colony was never good.

There are some Christian enclaves in the Moluccas and on Kalimantan. The island of Flores is also mostly Christian.

Buddhism has very few, if any, followers today, and it has been mostly a Chinese religion the last centuries. But it was a strong religion before Islam, and ruled the courts on both Sumatra and Java at the time. The Borobudur temple is said to be Buddhist.

On the island of Bali, most people adhere to hinduistic beliefs, although it is far from what you see in India. But on Bali, religion is not separated from everyday life, like it is where you have churches or mosques. The Balinese people live their religion everyday and everywhere.