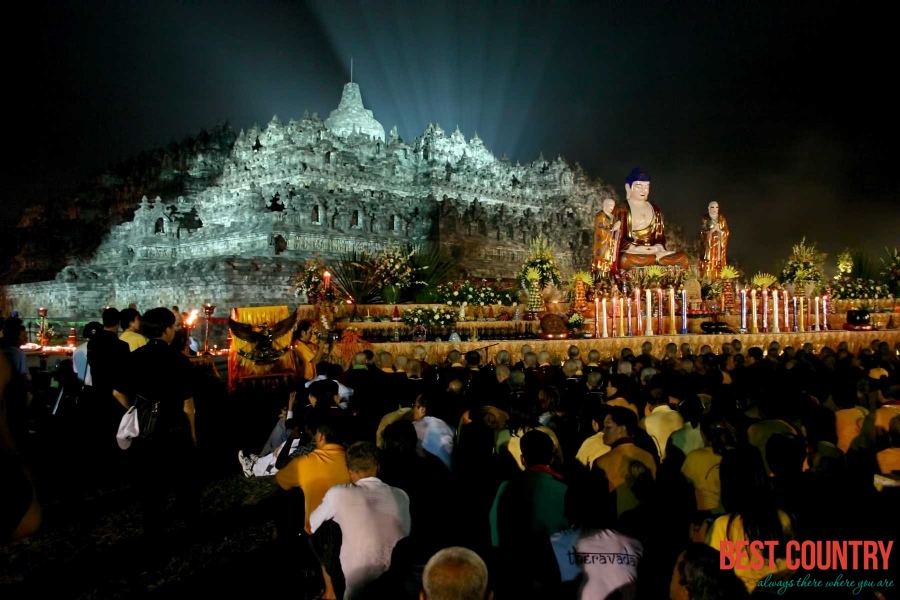 Indonesia festivals celebrate the country's multi-ethnic background, with celebrations devoted to Hindu, Muslim, secular, and local ethnic traditions. These holidays are only the most prominent ones known - in a country about as wide as the United States, there's bound to be a celebration going on somewhere on any given day!

Sekaten is celebrated to commemorate the birthday of the Prophet Muhammad. The celebrations are usually centered around the local royal palace, or kraton.

In Jogjakarta, the square to the north of the Sultan's Kraton at this time is filled with stalls, games, and cultural shows. The feast culminates with the procession of food mounds known as gunungan, which are blessed and distributed to the people. Devotees believe that good luck and a good harvest come to those who can secure a piece of the gunungan.

Solo (Surakarta) celebrates the festival with almost non-stop gamelan music - devotees believe the traditional music brings good luck to those who hear it.

The Jakarta International Java Jazz Festival (JJF) is the largest jazz festival in the region, and one of the biggest in the world.

The festival attracts tens of thousands of visitors every year, with 69,000 attending in 2008. Numerous international jazz artists perform during JJF, sharing stage space with Indonesia's very own jazz scene. The festival lasts three days, encompassing more than a hundred shows and thousands of artists.

The Bau Nyale festival is held in Lombok to commemorate the disappearance of a princess. Forced to choose among her suitors, the princess instead threw herself into the sea. When the townsfolk searched for the princess, they found nothing but masses of sea worms ("nyale").

"Bau nyale" literally means "to catch the worms", and takes place when the sea worms come to the beaches to spawn. The feast begins the night before the worms are caught, as fires are set on the beach and traditional Sasak cultural arts are performed. At dawn, the townsfolk catch the worms.

A local priest reads omens, predicting the condition of the forthcoming rice harvest. The worms are usually eaten raw or fried, and are considered an aphrodisiac.

Galungan is the most important holiday in the Balinese religious calendar. The day marks the victory of good over evil; the Balinese also believe that their ancestors' spirits descend back to earth to visit their old homes. The ancestors are welcomed and feted by the living.

Balinese set up decorated bamboo poles, or penjor, at the entrance of their family compounds. An amazing amount of food is prepared for Galungan, some of it going to the many offerings to the ancestors, and much of it going to feed families celebrating the holiday together.

Waisak is, for Indonesian Buddhists, a celebration of the Buddha's birth, death and enlightenment. On Waisak, the country's Buddhists converge on the great Buddhist monument of Borobudur, where hundreds of monks and other devotees climb the structure in single file, chanting as they march.

The procession begins from a smaller structure about a mile away, Candi Mendut, at two in the morning. From there, devotees will walk in single file, carrying candles to light the way. Upon arriving at Borobudur, the monks climb the temple, circling each level clockwise until they reach the top to wait for the appearance of the moon, marking the time when the Buddha was born.

The event is held in the capital of Denpasar, and is a unique opportunity for visitors to see Balinese culture distilled and staged in a single venue. Despite the all-Bali feel, the arts presented in the Bali Arts Festival are inspired at the local level - groups are selected in competitions between villages and regencies.

Tumpek Wayang is a sacred holiday for traditional puppeteers in Bali. On this day, special offerings are made to the Lord of Puppeteeers, and traditional puppets (wayang) are taken out of storage and displayed.

While this day is auspicious for wayang and their owners, it's considered especially unlucky for babies to be born on this day. Should this happen, a special ritual is performed to protect the child from spiritual harm.

Karapan Sapi is a bull-racing festival held in Madura Island, near Surabaya. Each race pits pairs of bulls against each other, each with one young jockey spurring them on. The finals are usually scheduled to coincide with the end of the harvest season; they are conducted at the island capital Pamekasan.