Indonesia is the largest economy in Southeast Asia and is home to over 230 million people. 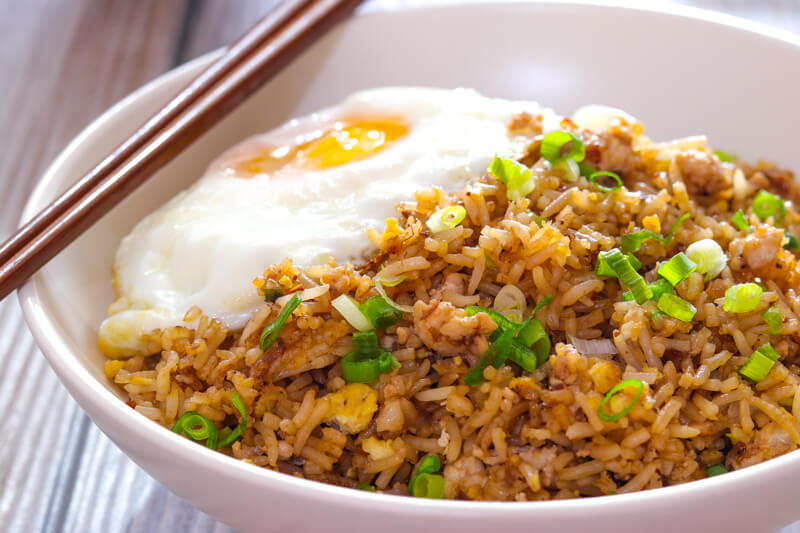 With a multitude of languages and ethnic groups spread across 17,000 islands, it is no surprise that the food in Indonesia is as diverse as its geography! Traveling through Indonesia provides a culinary journey like no other.

Food in Indonesia has been influenced over the centuries by China, Europe, and even India. European traders were drawn to Indonesia in search of expensive native spices such as nutmeg and cloves; the Portuguese introduced peanuts during their colonization. Indians brought curries with them and the Chinese contributed noodles and soybeans.

The rich ocean waters between the islands mean that seafood can be found in abundance and the equatorial climate provides the perfect weather for growing rice and soybeans.
Eating Out in Indonesia

Many restaurants in Indonesia serve main meals with kerupuk, light crackers made from prawns, and a fried egg (telur). Vegans should be aware that even dishes advertised as not containing meat are commonly prepared with eggs.

Food in Indonesia is commonly cooked ahead of time and then served at room temperature throughout the day to accommodate the irregular eating schedules of most people.

Outside of Chinese food stalls, chopsticks are rarely used as utensils in Indonesia. More commonly, meals are eaten with a spoon in the right hand and a fork in the left.

Restaurants away from tourist areas and signed simply as "Rumah Makan" (eating house) may expect you to eat with your hands as many locals do. Begin by dipping only your right hand in the bowl of water with lime found on the table and keep your left hand - associated with toilet functions - in your lap to be polite.

Unless specified, food in Indonesia is rarely spicy. Chili condiments known as sambal are provided in small dishes or bottles so that you can spice your own food to taste. Some sambal is made from fermented shrimp or fish; smell it first if you are not sure!

Like most of its neighbors, Indonesia's main staple is rice - served either plain or fried with spices. No traveler can pass through Indonesia without eating their weight in nasi goreng, Indonesia's tasty version of fried rice. This popular, low-cost dish is eaten by Indonesians regularly for dinner and sometimes even breakfast. Garlic, shallot, tamarind, and chili lend nasi goreng its delicious flavor.

Mie goreng - pronounced "mee goreng" - is the Indonesian version of fried noodles and is interpreted differently across the archipelago. Restaurants in tourist areas will serve thin, stir-fried, yellow noodles with spices and vegetables. Mi goreng in Flores or other rural areas may mean simply a pack of instant, ramen-style noodles that are high in fat and MSG.

Satay, skewered meat grilled over glowing charcoal, is one of the most common smells encountered while walking the streets in Indonesia. Commonly made from chicken, beef, goat, pork, or anything else that can be grilled on a stick, satay can serve as a quick snack or a main meal depending on the quantity of small skewers purchased. Satay is usually served with peanut sauce or sambal. 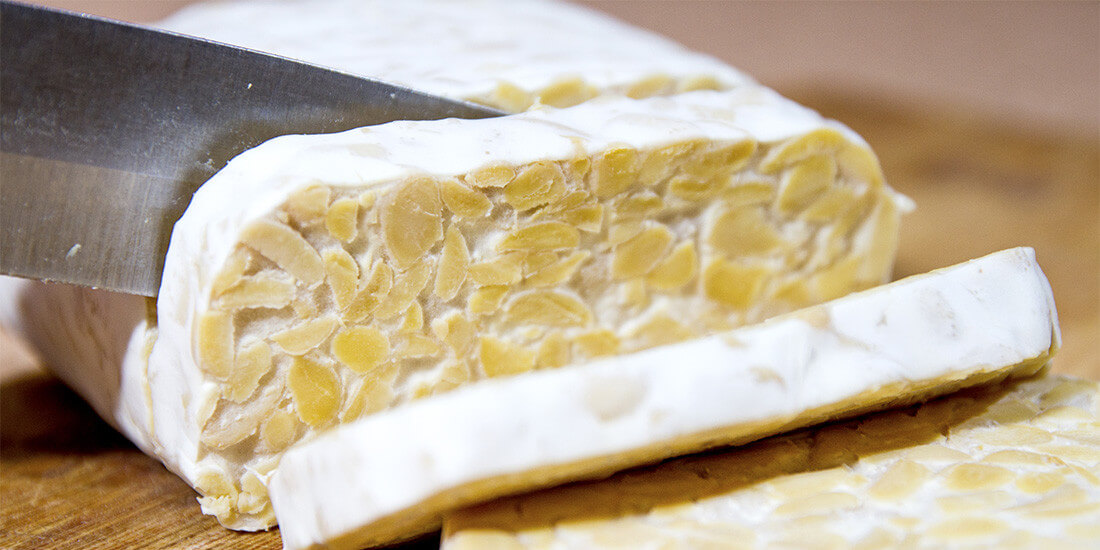 Tempeh is made by compressing fermented soybeans into a cake that is roasted or fried. The firm texture and delicious ability to go well with nearly any dish make tempeh the perfect meat substitute and its fame has already spread to the West.

Fried chicken is comfort-food for all parts of the world. Ayam goreng typically consists of one or two pieces of chicken that are fried to a crispy brown and served on rice. 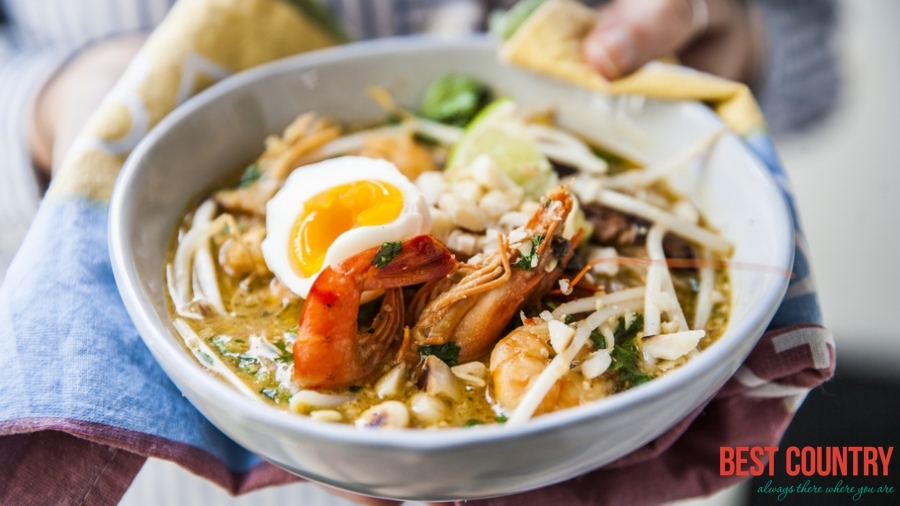 Laksa originated in Malaysia, however the fame and love for this famous noodle dish has spread throughout Indonesia. Laksa consists of rice noodles in a thick soup which somehow encompasses sweet, sour, fishy, tangy, and spicy flavors all in one dish. Read more about laksa.

Peanut oil is the most common oil used to stir-fry food in Indonesia. People that are allergic should specify "saya tidak mau kacang tanah" - translated "I do not want peanut".

Eggs are used as the base for many dishes. Vegans can ask for meals "tidak mau telur".

Anjing (dog) is served in buffet-style restaurants in some places and usually appears as small, fatty pieces of meat.

Street food is both cheap and delicious; try to choose carts and stands that get steady business or that cook the food in front of you.