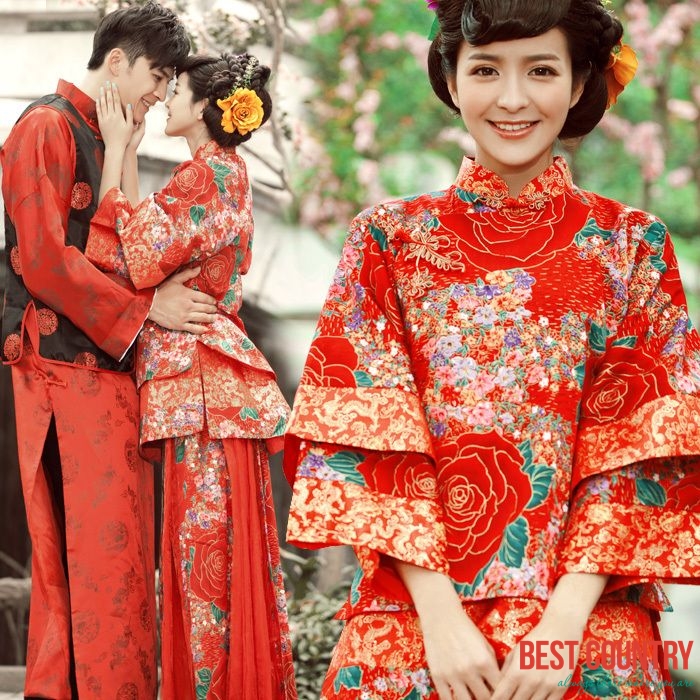 Chinese weddings were, and still are very important ceremonies as the Chinese regard marriage as one of the three most important events (the others being birth and death) in a person’s life.

Ancient rituals of a wedding were attributed to Zhou Gong a prince during the reign of Zhou Wu Wang (1066-1063 B.C.), who set the six rules in the Book of Rites for the union of a couple.

A marriage was to be “mei shuo zhi yan, fu mu zhi ming” (listen to the marriage broker and obey the command of the parents). A young couple did not have to meet and fall in love before they were married because the purpose of a union was to perpetuate the family line.

Most importantly the compatibility in terms of the eight characters (the year, month, day and time of birth) of the couple and the family background had to be considered. It was important that such information be gathered by a marriage broker called a mei po and that the dates of birth be assessed by a geomancer.

This was part of the first rite while the second rite was the presentation of the girl’s name and particulars.

If the horoscopes, eight characters and elements of birth of the couple were compatible they would be blessed with prosperity, posterity and good health, otherwise the couple would be unhappy and struck by ill luck.

Once the birthdates were found to be in harmony and suitable and the parents agreed to arrange the marriage the presentation of betrothal gifts would take place.

The third and fourth rites would be carried out, during which the parents of the would-be bridegroom would present gifts such as jade sceptre, a hairpin, biscuits, pieces of cloth and tea leaves, which symbolized firm commitment, as a tea plant cannot be transplanted, through the marriage adviser.

The fifth rite might be carried out after years of engagement and it consisted of the choosing of an auspicious day for the wedding.

The sixth rite was the most important as it was the actual wedding and consummation of the marriage. Before the wedding day, the exchange of gifts between the two families took place.

The parents of the bride would send her dowry of household utensils, furniture, jewellery and a special item consisting of a bronze bucket and a pair of shoes to symbolise prosperity and harmony for the new couple.

The bride had to perform many ceremonial rites after the wedding dinner, such as walking on sackcloth, covering her head, drinking wine with the groom, sitting in bed and being teased by relatives. These practices are no longer in fashion. After the wedding dinner the married couple retired to their bedroom or went off on honey moon.

By the early 20th century, the wedding ceremony had become quite elaborate. The bridegroom sent a sedan chair which arrived at the bride’s home accompanied by a group of Chinese musicians sounding gongs and blowing trumpets.

The bride, dressed in a classical costume and headdress, had to be carried out to the sedan chair by the marriage broker as she was not to walk on the ground, which was believed to be contaminated by evil spirits. She was to shed tears of sorrow at leaving her parent s’ home.

On her arrival the bridegroom shot three arrows into the air to rid the area of evil spirits. The bride was then carried into the house where the couple prayed and knelt first before the gods and then before the parents, offering tea and receiving red packets and jewellery.

Even the marriage broker received a red packet containing more than one banknote. Chinese always regarded a single item as inauspicious because it symbolizes loneliness. Happiness comes in doubles.

So the red packet should contain at least two notes. After the tea ceremony the sumptuous wedding dinner was hosted by the parents and the couple retired into their bedroom where a pair of elaborately carved long feng (dragon and phoenix) candles were lit symbolising a good and auspicious union.

It was believed that if the candles burnt off at the same time the couple would live to a ripe old age together.Otherwise one of them would die earlier, the long symbolising the male and the feng the female.These marriage customs were carried out within as well as outside China early 20th century.

Modern weddings based on tradition can be almost as elaborate as these.

Many overseas Chinese still follow tradition and choose an auspicious time and day for the wedding, although in the present day context traditional practices have been streamlined.

From the day the couple meet and fall in love to the time they decide to get married they may or may not host a dinner for the exchange of engagement rings in the presence of parents and friends.

Weddings of the rich still tend to be very elaborate and pompous but the average wage earner may host a simple wedding dinner or reception.

Marriage brokers still operate in some Asian countries, although their role in the marriage is different from what it was in the old days.

They work in matchmaking agencies, helping people who encounter difficulties in finding their partner in life or who have little opportunity to meet the right partner.

These agencies introduce the couples to each other and they do not normally analyse the suitability of birthdates. Instead they use computers to match those who share the same interests or have similar family backgrounds.

The tradition of the bridal gift to the groom is usually not followed by modern couples, but the bride may help in paying for the banquet, and this is sometimes seen as being the bride’s gift for the groom.

The bride is still collected from her house by the groom and the groomsmen, but today, if possible, they will go in decorated cars.

The weddings feast is probably considered the most important part of the celebrations. This is more of a parental event than any other part of the wedding.

The menu will include about twelve courses, including appetizer, roast pig, shark fin soup, fried rice or noodles, dessert, and fresh food. Each of the guests at the feast presents a monetary gift.

As the soup is served, the bridal couple go from table to table toasting the guests.

During her wedding day the bride will change her clothes four or five times, and after the meal she changes again.

When the guests leave, the couple, along with their parents and relatives, form a line at the door to thank the departing guests for coming.

Descriptions of Chinese weddings are complicated by the vast size of the country, differences among provinces, and marriage laws that have followed or been influenced by Western cultures and political ideology.