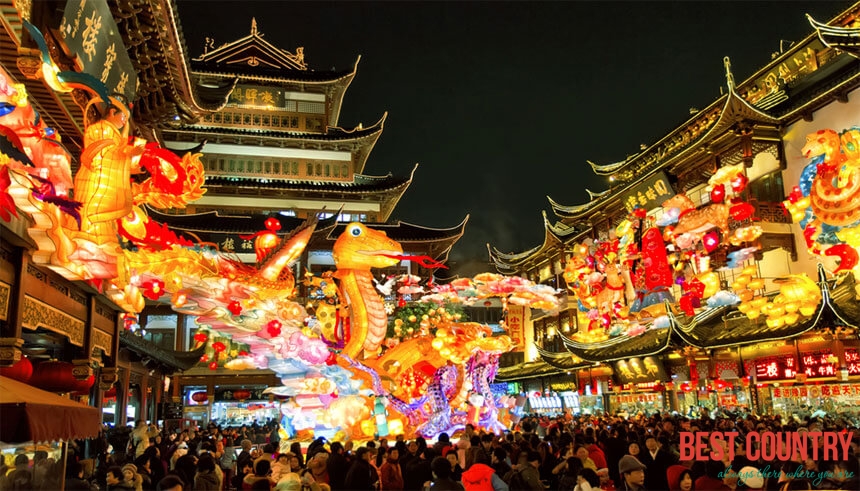 If you are in China at the time of New Year you will hear people wishing you Gung Hay Fat Choy. Don't get worried, it is Happy New Year in Chinese.

New Year celebrations is a grand event of China. New Year festivities lasts for one month in China. Chinese New Year is also called Spring festival. It begins from the middle of the last month of the year and ends up in the first month of the new year. These last day celebrations in China is called Lantern Festival.

Chinese New Year has a very interesting and unique history. According to the Chinese legends, there was a giant beast Nian who used to swallow humans in a single bite. Relief from the horrifying beast came only when people realized that Nian was scared of red color and loud noises. They started bursting crackers and used red color to scare the beast. Since then, this day was named as GuNian meaning "Pass over the Nian". Chinese considered the day an auspicious one as it brought new life for them and celebrated it as a New Year.

Chinese New Year falls on a different date every year. Chinese calender is a combination of solar and lunar calender. Chinese New Year falls on second new moon after the winter solstice. Chinese calender has a 12 year cycle and each year is named after animal. Chinese believe that every person resembles an animal and this reflects their traits. Year 2006 was the Year of the Dog. People born on this date are said to be very loyal and trustworthy. Similarly, every year has a it's own significance. Chinese New Year begins in February 18th 2008 and it is the Year of Pig.

Lot of excitement can be seen in the last 15 days of New Year celebrations. Every day has a special importance to it. Chinese ritualize and celebrate each day in a customary manner. Given below are the line wise celebrations of the New Year in China:

Day 1: People began their day by offering prayers and welcome the gods of heaven and earth. Most of the people stay away from meat to ensure healthy living.

Day 2: Successively, prayers are offer to their ancestors and other gods. Chinese are strict care-taker of dogs and feed them well. This is day is considered to be th birthday of all dogs.

Day 3 and 4: These are very important days for the families to keep up their relations. It calls for every son-in-law to pay respect to their parents-in-law.

Day 5: According to the traditions, nobody visits friends and relatives houses as it would bring bad omen. They stay back home to worship the God of wealth. The day is called Po Woo.

Day 6: On this day, people freely meet their near and dear ones and even visit nearby temples to pray for their well being and high spirits.

Day 7: This is Chinese farmers' day. They display their backbreaking produce. They also prepare a drink from seven different types of vegetables. On this day, everybody eats noodles which is a symbol of long life and fish representing success.

Day 8: It's an other day to be celebrated with the family and friends. They also offer midnight prayers to Tian Gong, the God of Heaven.

Days 10 to 13: From 10 to 12, people celebrate the days by having sumptuous dinner with the loved ones and the 13th day is left for a very light dinner to cleanse the system.

Day 14: People start preparing for the celebration of Lantern Festival to be held on next day.

Day 15: Since it is the first night to see full moon, people hang out colorful lanterns, eat glutinous rice balls and enjoy the day with their families.

To prepare for the New Year, Chinese clean their houses, repay any money they owe, get their hair cut, and buy new clothes. They also light up their houses and adorn it with signs of peace and luck. They use red color in all their decorations which is very considered auspicious.