In Chinese the word for alcohol "jiu" is used to mean all types of alcoholic beverages, from 'pijiu' (beer) to liquors (just called 'jiu') to grape wine ('putao jiu').

The same character is used in Japanese and Korean, for that matter. This lumping together of all intoxicating beverages gives us great insight into the traditional use for alcohol, intoxication.

Even in modern China alcoholic beverages are generally classed by the general population by how much intoxication it delivers for the money. From this point of view table wine is at the bottom rung of the consumer preference list, with brandy being much higher.

In China, wine could also be called the "Water of History" because stories about wine can be found in almost every period of China's long story. The origins of the alcoholic beverage from fermented grain in China cannot be traced definitively.

It is believed to have 4,000 years history. A legend said that Yidi, the wife of the first dynasty's king Yu (about 2100 BC) invented the method. At that time millet was the main grain, the so-called "yellow wine", then rice became more popular.

It was not until the 19th century that distilled drinks become more popular. Traditionally, Chinese distilled liquors are consumed together with food rather than drunk on their own. 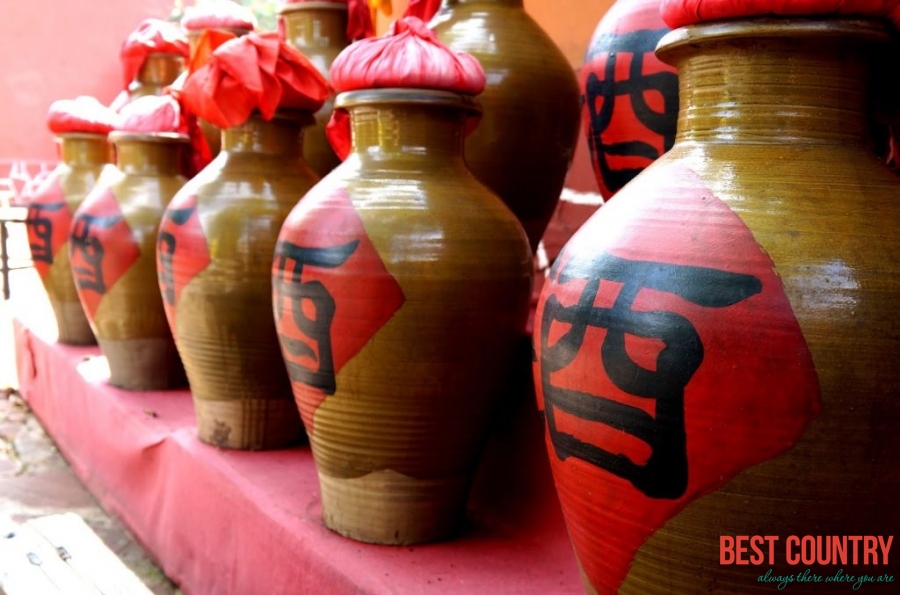 Without a doubt, wine occupies an important place in the culture and life of the Chinese people. Wine was intimately connected with most Chinese men of letters.

It was also an inseparable part of the life of ordinary Chinese people. The banquets of ancient emperors and kings could not take place without it.

Every sort of wine vessel thus became an important kind of sacrificial object. Inscriptions on bones and tortoise shells as well as bronze inscriptions preserve many records of Shang-era people worshiping their ancestors with wine.

There were many famous Chinese poet or artist who crafted their masterpieces after getting "drunk". The famous poet Li Bai of the Tang Dynasty (AD 618-907) is known as the "Immortal of Wine" because of his love of alcohol. Guo Moruo, a modern scholar, compiled statistics about Li's poems and found 17 per cent of them were about drinking.

Early writers liked drinking and thought it an elegant way to pass the time. Apart from the taste of the drink, they also concentrated on the process of drinking. They created many games to go with drinking sessions involving a knowledge of history, literature, music and poetry.

In ancient times, before a battle, a general would feast his soldiers with alcohol and meat. If they won the battle, they would be rewarded with good wine. If a warrior fell in battle, his fellows would scatter wine on the ground as part of a memorial ceremony.

Ordinary Chinese people today have always just used alcohol to help them celebrate the happiness in their lives.

In China, a banquet known as "Jiu Xi" means an alcohol banquet and the life of every person, from birth to death, should have pauses for drinking banquets starting a month or 100 days after a baby's birth when the parents invite people in for a drink.

When someone builds a new house, marries, starts a business, makes a fortune or lives a long life, he should invite people in for a drinking session. In modern times it is a pity that the games that go with drinking are not the elegant ones of the past that involved poetry or music.

Today, drinkers just play simple finger-guessing games along with a lot of heavy drinking. It also seems today that friendship depends only on the volume of drink being consumed.

"If we are good friends, then bottoms up; if not, then just take a sip" is a common phrased exchanged during gatherings.

Chinese yellow liquors, are fermented wines that are brewed directly from grains such as rice or wheat. Such liquors contain less than 20% alcohol, due to the inhibition of fermentation by ethanol at this concentration.

These wine are traditionally pasteurized, aged, and filtered before their final bottling for sale to consumers. Yellow liquors can also be distilled to produce white liquors, or baijiu (see below).

White liquors (baijiu) are also commonly called shaojiu, which means "hot liquor" or "burned liquor", either because of the burning sensation in the mouth during consumption, the fact that they are usually warmed before being consumed, or because of the heating required for distillation.

Liquors of this type typically contain more than 30% alcohol in volume since they have undergone distillation. There are a great many varieties of distilled liquors, both unflavored and flavored.

Fen jiu - this wine was dated back to Northern and Southern Dynasties (550 A.D.). It is the original Chinese white wine made from sorghum. Alcohol content by volume: 63-65%.

Zhu Ye Qing jiu - this wine is Fen jiu brewed with a dozen or more of selected Chinese herbal medicine. One of the ingredients is bamboo leaves which gives the wine a greenish color and its name. Alcohol content by volumne: 46%.

Mao Tai jiu - this wine has a production history of over 200 years. It is named after its origin at Mao Tai town in Guizhou Province.

It is make from wheat and sorghum with a unique distilling process that involves seven iterations of the brewing cycle.

This wine is made famous to the western world when the Chinese government served this in state banquets entertaining the US presidents. Alcohol content by volume: 54-55%.

Gao Liang jiu - Goa Liang is the Chinese name for sorghum. Besides sorghum, the brewing process also use barley, wheat etc. The wine was originated from DaZhiGu since the Ming Dynasty.

Wu Jia Pi jiu - a variety of gao liang jiu with a unique selection of Chinese herbal medicine added to the brew. Alcohol content by volume: 54-55%.

Da Gu jiu - Originate from Sichuan with 300 year of history. This wine is made of sorghum and wheat by fermenting in a unique process for a long period in the cellar. Alcohol content by volume: 52%.

Yuk Bing Shiu jiu - a rice wine with over 100 year history. It is made of steamed rice. It is stored a long period after distillation. Alcohol content by volumne: 30%.

San Hua (three flowers) jiu - a rice wine made in Guilin with allegedly over a thousand year history. It is famous for the fragrant herbal addition and the use of spring water from Mount Elephant in the region. Alcohol content by volumne: 55-57%.

The unique brewing technique use another wine as raw material, not starting with water. The wine has an orange red color. Alcohol content by volume: 18%.

Hua Diao jiu - a variety of yellow wine originates from Shaoxing, Zhejiang. It is made of glutinous rice and wheat. Alcohol content by volume: 16%.