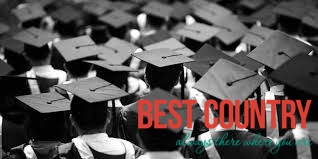 Investment in education accounts for about 4% of total GDP in China. In 1986, the Chinese government passed a compulsory education law, making nine years of education mandatory for all Chinese children.

Today, the Ministry of Education estimates that 99.7 percent of the population area of the country has achieved universal nine-year basic education.

Over the past few years, the number of international students who study abroad in China has significantly increased every year.

At the same time, China is improving the quality of education through a major effort at school curriculum reform.

China has a consistent teacher development system. Teaching has historically been and remains today a highly respected profession in China.

Teachers have strong preparation in their subject matter and prospective teachers spend a great deal of time observing the classrooms of experienced teachers, often in schools attached to their universities.

Once teachers are employed in school, there is a system of induction and continuous professional development in which groups of teachers work together with master teachers on lesson plans and improvement.

History of Education in China

Many scholars believe the history of education in China can be traced back at as far as the 16th century B.C. during the late "Xia Dynasty" (1523-1027 B.C.). Throughout this period of time, education was the privilege of the elites.

Traditional Chinese Medicine Education has developed gradually higher and secondary professional education, postgraduate education. The TCM higher education has been expanded in scale and its professional structure has been rationally regulated.

Since 1978 when China inaugurated the opening and reform initiative, international communication and cooperation in the education sector has migrated onto a new stage cheering healthy development of abroad studying, increasing number of foreigners studying in China.

Education Law of the People's Republic of China

Adopted at the third session of the eighth National People's Congress, promulgated by Order No.45 of the President of the People's Republic of China on March 18, 1995 and effective as of September 1, 1995.

Pre-school education is an important component of education cause in China. In urban areas, it is mainly kindergartens of 3 years, two years or one year which could be full time part-time, boarding or hour-reckoned.

Primary and Secondary Education in China

Since the promulgation of the "Compulsory Education Law of the People's Republic of China" in 1986, the 9-year compulsory education has been implemented by governments at various levels and made significant progress.

Higher education in China has played an important role in the economic construction, science progress and social development by bringing up large scale of advanced talents and experts for the construction of socialist modernization.