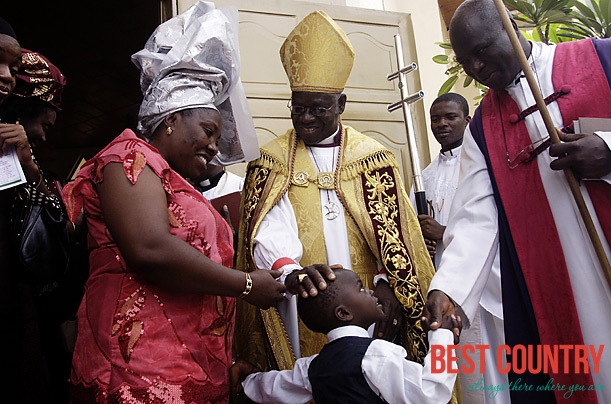 Religious affiliation in Nigeria is strongly related to ethnicity, with rather distinct regional divisions between ethnic groups. The northern states, dominated by the Hausa and Fulani groups, are predominantly Muslim while the southern ethnic groups have a large number of Christians. In the southwest, there is no predominant religion.

The Yoruba tribe, which is the majority ethnic group in the southwest, practice Christianity, Muslim, and/or the traditional Yoruba religion, which centers on the belief in one supreme god and several lesser deities.

verall statistics indicate that about 50% of the population are Muslim, with a majority practicing the Sunni branch of the faith. About 40% are Christian and about 10% practice traditional African religions or no religion at all.

Many people include elements of traditional beliefs in their own practice of Christianity or Islam. The Christian community is composed of Roman Catholics (the largest denomination), Methodists, Anglicans, Baptists, Presbyterians, and members of Evangelical and Pentecostal groups.

Though the constitution prohibits state and local governments from declaring an official religion, a number of states have recently adopted various forms of the Islamic criminal and civil law known as Shari'ah, a move which many Christians believe to be an adoption of Islam as the de facto religion. The constitution also provides for freedom of religion, however, some states have restricted religious demonstrations, processions, or gatherings as a matter of public security.

Business owners and public officials have been known to discriminate against individuals of a faith different than their own in matters of providing services and hiring practices. The same type of discrimination exists between members of different ethnic groups. Certain Christian and Muslim holidays are officially observed.

There is a high degree of tension between Christians and Muslims with a record of violence against both groups. However, conflicts may stem primarily from ethnic and regional differences, since there are a number of reports of violence between different ethnic groups of the same religion.