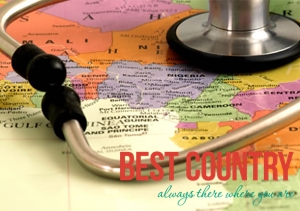 Health care provision in Nigeria is a concurrent responsibility of the three tiers of government in the country.Private providers of health care have a visible role to play in health care delivery.

The total expenditure on health care as % of GDP is 4.6, while the percentage of federal government expenditure on health care is about 1.5%. A long run indicator of the ability of the country to provide food sustenance and avoid malnutrition is the rate of growth of per capita food production; from 1970–1990, the rate for Nigeria was 0.25%.[4] Though small, the positive rate of per capita may be due to Nigeria's importation of food products.

In May 1999, the government created the National Health Insurance Scheme, the scheme encompasses government employees, the organized private sector and the informal sector. Legislative wise, the scheme also covers children under five, permanently disabled persons and prison inmates. In 2004, the administration of Obasanjo further gave more legislative powers to the scheme with positive amendments to the original 1999 legislative act.

A new bone marrow donor program, the second in Africa, opened in 2012. In cooperation with the University of Nigeria, it collects DNA swabs from people who might want to help a person with leukemia, lymphoma, or sickle cell disease to find a compatible donor for a life-saving bone marrow transplant. It hopes to expand to include cord blood donations in the future.

Adequate sanitation is typically in the form of latrines or septic tanks. General sewerage system is almost non-existent, as most home use septic tanks to dispose their human wastes. Except for Abuja and limited areas of Lagos, no urban community has a general sewerage treatment system. A 2006 study estimated that only 1% of Lagos households were connected to general sewers.