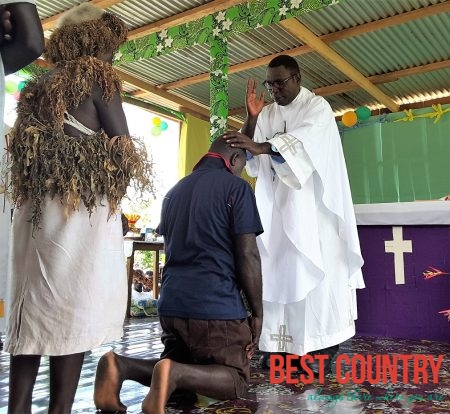 An estimated 5 percent of the population, consisting primarily of the Kwaio community on the island of Malaita, practice indigenous animistic religions. Groups that together constitute less than 5 percent of the population include the Ahmadiyya Muslim Community and other Muslims, the Baha'i Faith, Jehovah's Witnesses, the Church of Jesus Christ of Latter-day Saints (Mormons), Unification Church, and indigenous churches that have broken away from the major Christian denominations. There are believed to be members of other religious groups within the foreign community who were free to practice, but they are not known to proselytize or hold public religious ceremonies. According to the most recent reports, there are approximately 350 Muslims.

Christianity was brought to the country in the 19th and early 20th centuries by missionaries representing several Western denominations. Some foreign missionaries continue to work in the country. Except for the Roman Catholic Church, whose clergy is approximately 45 percent foreign, the clergy of the established churches is nearly entirely indigenous.

The Constitution provides for freedom of religion, and the Government generally respects this right in practice. The US government received no reports of societal abuses or discrimination based on religious belief or practice in 2007.