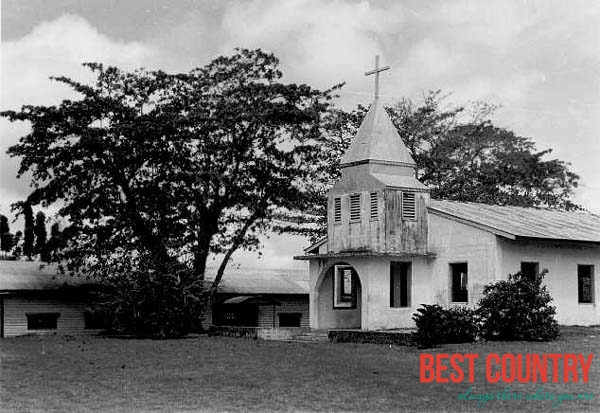 Roman Catholicism is the dominant religion in Palau; approximately 65% of the population are members. Estimates of other religious groups with a sizable membership include the Evangelical Church, 2,000; Seventh-day Adventists, 1,000; The Church of Jesus Christ of Latter-day Saints (Mormons), 300; and Jehovah's Witnesses, 90.

Modekngei, which embraces both animist and Christian beliefs and is unique to the country, has approximately 1,800 adherents.There also is a primarily Catholic Filipino expatriate community of 6,800 persons.Additionally, about 1% of the population was estimated to be Buddhist in 2010, with the small Chinese community also practicing elements of Chinese folk religion alongside as well.

Since the arrival of Jesuit priests in the early 19th century, foreign missionaries have been active; some have been in the country for many years. During the Japanese mandate, Japanese Christian missions were heavily subsidized; Japan's native Buddhists were given a comparative pittance.

Japanese rule brought Mahayana Buddhism and Shinto to Palau, with the syncretism of the two being the majority religion among Japanese settlers. However, following Japan's World War II defeat, the remaining Japanese largely converted to Christianity, while the remainder continued to observe Buddhism, but stopped practicing Shinto rites.

The Seventh-day Adventist and Evangelical churches have missionaries teaching in their respective elementary and high schools. There are also approximately 400 Bengali Muslims in Palau, and recently a few Uyghurs detained in Guantanamo Bay were allowed to settle in the island nation.

The Constitution provides for freedom of religion, and the Government generally respects this right in practice. The US government found no reports of societal abuses or discrimination based on religious belief or practice.