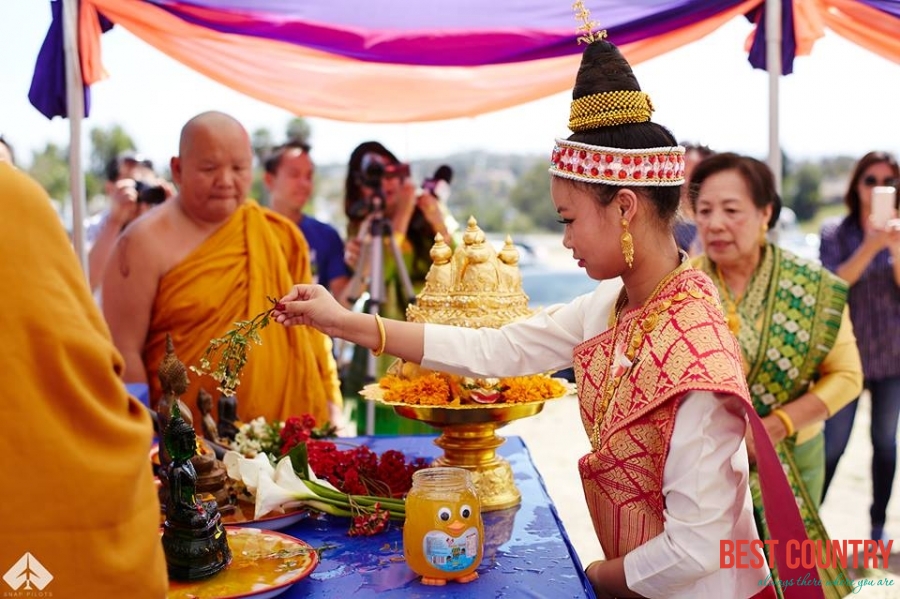 Pi Mai Lao or Lao New year is the liveliest holiday of the year and one that everyone looks forward to, as it is a time when many people visit their families all over the country.

It takes place around 13-15th April, the hottest part of the year, which is why no one really minds being constantly wet from the water being thrown everywhere.

The three days of Pi Mai

The first day is the last day of the old year. Perfume, water and flowers are prepared for the Lao New Year. In temples all over the country, Buddha images are taken down from their permanent places and placed on special temporary easy-to-access places within the wat (temple) compounds so villagers can pour perfumed water on them. They then collect the water that runs off the Buddha images and take it home to pour on family members, friends and relatives. This is believed to bless, clean and purify the receivers before entering the Lao New Year.

The second day of the Lao New Year festival is the "day of no day", a day that falls in neither the old year nor the new year. Houses and villages are properly cleaned on the second day. Traditionally elders will not allow young people to take nap or stay still on the second day as it’s believed that if one sleeps or stays still one will get sick in the coming year.

They encourage young people to clean their places and go out to pour water on other elders in the village and wish them well, and finally get wet themselves. This is a way to clean and send bad things away with the old year.

The last day of the festival marks the start of the new year. This day many families will hold a Baci at their houses to welcome Lao New Year as well as to wish their elders good health and long life. Some might respectfully ask for forgiveness from their elders for things that they did in the past year that might have hurt their feelings unintentionally. And at the same time they give the elders gifts.

In late afternoon or evening of the last day, in the temples, the Buddha images are moved back to their permanent homes. On that same evening devotees go to wats to listen to the monks chanting as an act to ask for forgiveness from the monks as well as from the Buddha images for what they did (pouring water on them) in this past few days that might have accidentally touched them (monks and Buddha are not to be touched). After that, a vien tien – a candlelight procession – takes place around the wat and that is the end of the Lao New Year celebration.

Water is for washing homes, Buddha images, monks, and soaking friends and passers-by. Students first respectfully pour water on their elders, then monks for blessings of long life and peace, and last of all they throw water on each other. The water is perfumed with flowers or natural perfumes. Some people prefer flowers in the water to give a pleasant smell, as well as adding cologne/perfume.

The idea of watering came from the legend of King Kabinlaphom, whose seven daughters kept his severed head in a cave. The daughters would visit their father's head every year and perform a ritual to bring happiness and good weather. Sometimes people also throw white powder on each other during the celebrations.

Sand is brought to the temple grounds and is made into stupas or mounds, then decorated before being given to the monks as a way of making merit. There are two ways to make the sand stupas. One way is to go to the river bed and build them using river sand, and the other way is to bring sand to the wat. Sand stupas are decorated with flags, flowers, white lines, and splashed with perfumed water. Sand stupas symbolise the mountain, Phoukao Kailat, where King Kabinlaphom's head was kept by his seven daughters.

Another way to make merit at this time is to set animals free. The Lao believe that even animals need to be free. The most commonly freed animals are tortoises, fish, crabs, birds, eels, and other small animals.

Flowers are gathered to decorate images of the Buddha. In the afternoons people collect fresh flowers. Senior monks take the younger monks to a garden filled with flowers, where they pick flowers and bring back to the wat to wash. People who didn't participate in the flower picking bring baskets to wash the flowers so the flowers can shine with the Buddha statues.

Pi Mai Lao is particularly spectacular in Luang Prabang as this is where there are many parades and other festivities, which normally last about a week.

The religious highlight is when the revered Prabang Buddha image is carried through the streets in a golden house supported by two long poles, carried by young men. Leading the parade are two red-faced mythical characters called Pou Gneu and Gna Gneu (Grandpa and Grandma Gneu). At parade’s end, the statue is placed at Vat May where it rests for the three-day festival. Throughout this time people pour water scented with flowers over it.

There is an annual beauty pageant in Luang Prabang called the Nang sangkhane pageant. There are seven contestants, each one symbolising one of King Kabinlaphom's seven daughters and they ride down the street, sometimes on elephants.

In the evenings, there will be processions of nagas, lanterns and many traditional performances.

Don’t forget to wish everyone a happy Lao New Year, souksan van pi mai or sabidee pimai, and smile while you get wet.