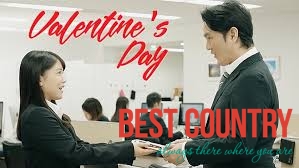 Valentine's Day all over the world especially in English speaking countries is celebrated usually on 14th February. In Japan, it is celebrated on two different days. The one celebrated on 14th February is called Valentine's Day like in the rest of the world, but is different in the sense that women present gifts (usually chocolate gifts) to men. One may wonder then whether there is a day in Japan when men gift women with presents to express their love. That day occurs one month later on 14th March called White Day, which is known to be a 'reply day'. This day men offer gifts to women expressed their interests.

With a strong influence and successful marketing efforts from the West, many Asian countries too have adopted the celebration of Valentine's Day. In Japan, the concept was introduced in 1960, by one of the largest confectionery companies, Morinaga. As a part of their marketing plan, this huge corporate was responsible for creating the current custom of women giving gifts to men on Valentine's Day. It was earlier particularly intended for working women, who were allowed to present gifts to colleagues. IN response to this custom, the Japanese National Confectionery Industry Association decided to create a day to allow men to reciprocate gifts they received from women; and that is how 14th March was named as White Day.

There is a stark difference between gifts acceptable in western countries when compared to Japan. The unique tradition in Japan gets more distinct as the most common gift or rather the only gift that is presented is chocolate. Gifts like flowers, candies and going for dates are quite uncommon. Moreover it is has almost become a traditional affair where women are obliged to give all colleagues chocolate gifts. There are three types of chocolates that are gifted denoting the intention of the gift.

To reciprocate affection and love, men present gifts to women on White Day one month later. The gifts bought on this day are not restricted to chocolate and are definitely more expensive. On this day, men are expected to give gifts twice or thrice the amount of chocolate received; locally known as `Sanbai Gaeshi' it literally translates to thrice in return. Some of the popular gifts are white chocolate, cookies, marshmallows, white lingerie and jewelry.

On the whole, Valentine's Day in the East was introduced and is promoted mainly by corporate companies who wish to capitalize on the feeling of love and affection by encouraging consumers to purchase more gifts.