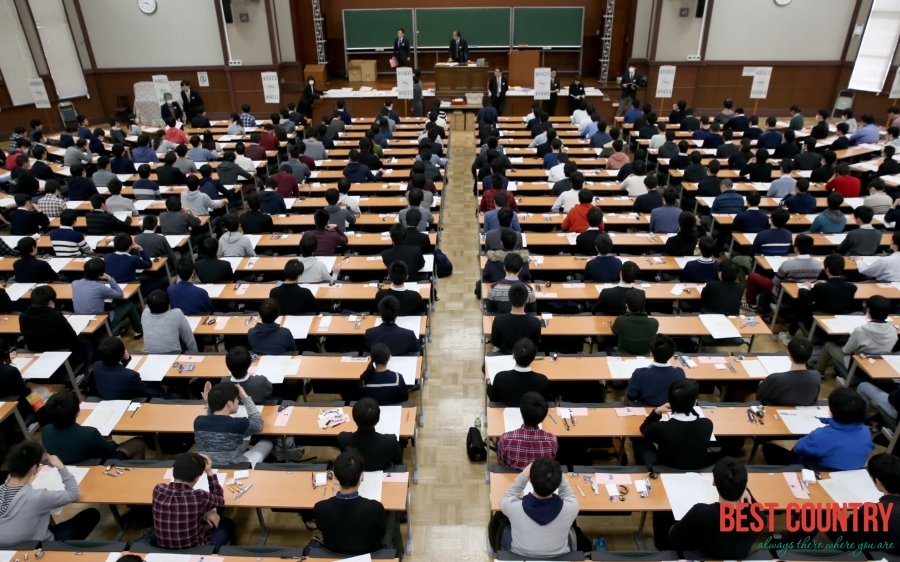 Japan has one of the world's best-educated populations, with 100% enrollment in compulsory grades and zero illiteracy. While not compulsory, high school (koukou) enrollment is over 96% nationwide and nearly 100% in the cities. High school drop out rate is about 2% and has been increasing. About 46% of all high school graduates go on to university or junior college.

The Ministry of Education closely supervises curriculum and textbooks, and classes with much the same content are taught throughout the country. As a result, a high standard of education becomes possible.

Most schools operate on a three-term system with the new year starting in April. The modern educational system started in 1872 modeled after the French school system which began in April. The fiscal year in Japan also begins in April and ends in March of the following year, it is more convenient in many aspects. April is the height of spring when cherry blossom (the most loved flower of the Japanese!) bloom and a most suitable time for a new start in Japan. This difference in the school-year system causes some inconvenience to students who wish to study abroad in the U.S. A half year is wasted waiting to get in and often another year is wasted when coming back to the Japanese university because of having to repeat a year.

Except for the lower grades of elementary school, it is usual to average 6 hours of school a day on weekdays, one of the longest school days in the world. Even after school lets out, the children have drills and other homework to keep them busy. Vacations are 6 weeks in the summer and about 2 weeks each for winter and spring breaks. There is often homework over these vacations.

Every class has its own fixed classroom where its students take all the courses, except for practical trainings and laboratory works. During elementary education, in most cases, one teacher teaches all the subjects in each class. Because of the rapid population growth after World War II, the numbers of students in a typical elementary and junior high schools once exceeded 50, but now it is kept under 40. At public elementary and junior high school, school lunch (kyuushoku) is provided on a standardized menu, and it is eaten in the same classroom. Nearly all junior high schools require their students to wear the school uniforms (seifuku).

A great difference between Japanese school system and American School system is, the American respects independence and the Japanese control individual responsibility by observing the group rules. This explains the Japanese characteristic of group behavior.