Cuisine of Sao Tome and Principe

The cuisine is based on tropical root crops, plantains, and bananas, with fish as the most common source of protein. The vegetables consist of gathered indigenous greens that are cooked in red palm oil. 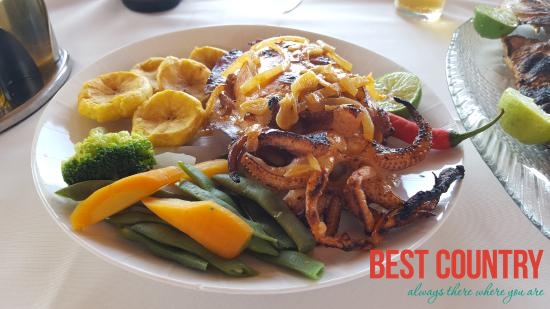 Production of foodstuffs is inadequate as a result of the islands' history as a plantation economy. Traditional palm oil stews are the national dish. The traditional food includes fruit bats and monkey meat. New World fruits such as papayas and guavas are abundant. Citrus trees can be found in most yards.

Since colonial times, the country's reliance on food from abroad has begun to change the food culture. Imported rice and bread made of imported wheat flour are staple foods of urban dwellers.

Generally people eat a hot meal cooked before sunset. Breakfast consists of reheated food from the night before or tea and bread. People generally eat around the hearth, which in most dwellings is a separate structure made of wood or fronds.