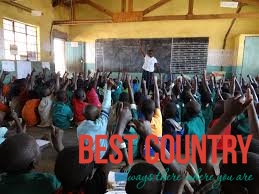 Education in Malawi no longer stresses academic preparation leading to access to secondary school and universities, rather the stress is now on agriculture and practical training since few students go on to high school or university and most begin work immediately after primary school.

Wood working, metal work, and technical drawing are encouraged for boys, and home economics is encouraged for girls. One of the biggest criticisms of secondary schools in Malawi is that they are too university-oriented and needs more technical skills taught. Most students immediately enter the workforce and need a different orientation. Therefore, Secondary schools do not produce as many graduates as the labor market demands.

The government established free primary education for all children in 1994, which increased attendance rates, according to UNICEF. In 1994, the gross primary enrollment rate was 133.9 percent, and the net primary enrollment rate was 102.6 percent.In 1995, 62 percent of students entering primary school reached grade two, and 34 percent reached grade five. The dropout rate is higher among girls than boys.

Private schools have risen in Malawi and offer an alternative to public schools. Private schools include school like Phungu, Lilongwe Girls, and Sunnyside School. Some consolidates private schools are run by the Designated Schools Board.