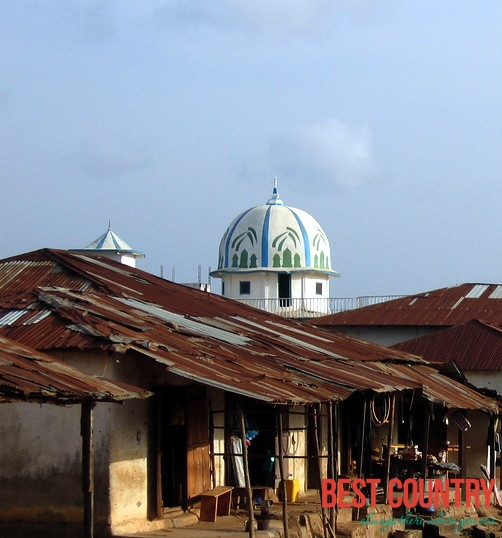 According to the 2008 National Census, 85.5% of Liberia's population practices Christianity.Muslims comprise 12.2% of the population, largely coming from the Mandingo and Vai ethnic groups. The vast majority of Muslims are Malikite Sunni, with sizeable Shia and Ahmadiyya minorities.

Some of the Pentecostal movements are affiliated with churches outside the country, while others are independent. There are also members of the Church of Jesus Christ of Latter-day Saints (Mormons) and Seventh-day Adventists. Christians live throughout the country.

In a religious context, the term kwi connotes a style of worship of a particular Christian church which is marked by formality and decorum. Kwi is a Liberian term used to connote Westernization.Services in churches considered to be non-kwi have more outward spiritualist expression, with dancing and even street processions in colorful costumes as key elements.

Non-kwi churches also have self-proclaimed prophets who interpret dreams and visions, and prioritize a direct experience with the Holy Spirit. Liberia's educated elite have historically regarded the apostolic churches as churches of the uneducated and thus non-kwi.

The Muslim population is mainly found among the Mandingo and the Vai ethnic groups. Vai live predominantly in the west. Mandingo reside throughout the country.

Regardless of public statements of identification with Christianity, a "vast majority" of Liberians believe a supernatural world of ancestral and bush spirits that impact daily life.[8] Ethnic groups in all regions of Liberia participate in the traditional religious practices of the Poro and Sande secret societies, with the exception of the Krahn ethnic group, who have their own secret society.[9]

"Liberian religious culture is characterised by a predisposition towards secrecy (encapsulated in the concept of ifa mo - "do not speak it") and an ingrained belief in the intervention of mysterious forces in human affairs".[10] "Both elite and non-elite Liberians usually attribute events to the activities of secret powers and forces".

"Beliefs include the conviction that there are deep and hidden things about an individual that only diviners, priests, and other qualified persons can unravel. This presupposes that whatever exists or happens in the physical realm has foundations in the spirit world".

The Sande society is a is a female secret society found in Liberia, Sierra Leone, Guinea and the Ivory Coast that initiates girls into adulthood, confers fertility, instills notions of morality and proper sexual comportment, and maintains an interest in the well-being of its members throughout their lives.

In addition, Sande champions women's social and political interests and promotes their solidarity vis-a-vis the Poro society, a complementary institution for men. Today this social institution is found among the Bassa, Gola, Kissi, Kpelle, Loma, People and Vai of Liberia.

Throughout the region, the complementarity of men's and women's gender roles – evident in such diverse activities as farming, cloth production, and musical performances – reach full expression.

The women's Sande and men's Poro associations alternate political and ritual control of "the land" (a concept embracing the natural and supernatural worlds) for periods of three and four years respectively. During Sande's sovereignty, all signs of the men's society are banished.

At the end of this three-year period, the Sande leadership "turns over the land" to its counterparts in the Poro Society for another four years, and after a rest period the ritual cycle begins anew.

The alternating three- and four-year initiation cycles for women and men respectively are one example of the widespread use of the numbers 3 and 4 to signify the gender of people, places and events; together the numbers equal seven, a sacred number throughout the region.

A large number of foreign missionary groups work openly and freely in the country. The Constitution provides for freedom of religion, and the Government generally respects this right in practice. Despite frequent interaction among religious groups, some tensions remain. Some societal abuses or discrimination based on religious belief or practice occur.