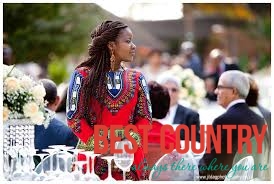 As with many African countries, the Angolan culture constitutes a number of different tribes. Naturally, Angolan weddings and traditional marriage practices will and do vary from tribe to tribe and culture to culture.

Both monogamous as well as polygamous marriages are seen in the cultures of Angolans but the traditional wedding is pretty much the same regardless.

You can most definitely integrate some of the Angolan culture into your own wedding. Well... maybe not the whole polygamy part... but more so the other cultural elements.

Among the Eumbo (or Ambo) people, the "wedding consultant" walks the couple through the steps of their traditional Angolan marriage ceremony. In your case, I guess, I will serve as your own personal wedding consultant!

As a show of his willingness to marry their daughter and desire to be accepted into her family, the groom-to-be will spend time working in the bride's father's fields and farms. He will also perform various household chores for her mother.

It is also customary in Angolan weddings for his family to give gifts to the girl's family. Nowadays however, if the groom-to-be has a regular day job, he will give clothing and gifts to the girl and her family in lieu of working in the farms, fields and around the house. Your guy can take a trip down to his local mall and get this particular task done very effectively and efficiently. You of course can help out by dropping hints about what your favorite stores are so that you can be sure to get items you'll like and use.

Polygamy among the Eumbo is considered to be superior to monogamy and the husband must "visit" all his wives equally. Once he is ready to marry a girl, the man will select an older woman in his family - usually either his paternal grandmother or his father's sister - to train his wife-to-be on how to be a good wife.

It is the groom's duty to prepare the matrimonial bed. Leaves from the negwelulu tree are spread on the bed as these are believed to intensify sexual excitement.

After the wedding, the groom and his new mother-in-law are not allowed to meet again until after the couple's first child is born.