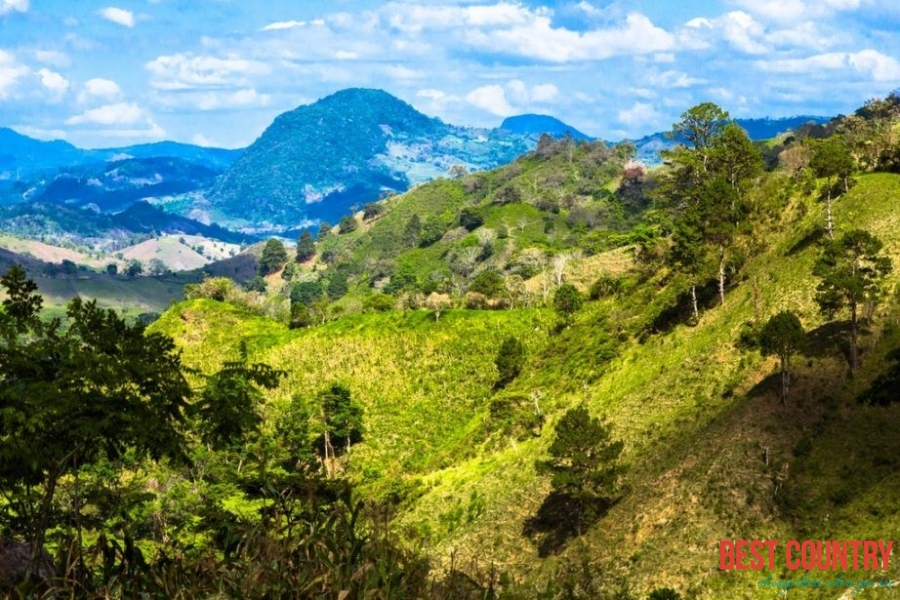 The climatic types of each of the three physiographic regions differ. The Caribbean lowlands have a tropical wet climate with consistently high temperatures and humidity, and rainfall fairly evenly distributed throughout the year. The Pacific lowlands have a tropical wet and dry climate with high temperatures but a distinct dry season from November through April. The interior highlands also have a distinct dry season, but, as is characteristic of a tropical highland climate, temperatures in this region decrease as elevation increases.

Unlike in more northerly latitudes, temperatures in the tropics vary primarily with elevation instead of with the season. Land below 1,000 meters (3,281 ft) is commonly known as tierra caliente (hot land), between 1,000 and 2,000 meters (3,281 and 6,562 ft) tierra templada (temperate land), and above 2,000 meters (6,562 ft) tierra fría (cold land). Both the Caribbean and Pacific lowlands are tierra caliente, with daytime highs averaging between 28 and 32 °C (82.4 and 89.6 °F) throughout the year. In the Pacific lowlands, April, the last month of the dry season, brings the warmest temperatures; the rainy season is slightly cooler, although higher humidity during the rainy season makes these months feel more uncomfortable. In the Caribbean lowlands, the only relief from the year-round heat and humidity comes during December or January when an occasional strong cold front from the north (a norte) brings several days of strong northwest winds and slightly cooler temperatures.

The interior highlands range from tierra templada to tierra fría. Tegucigalpa, in a sheltered valley and at an elevation of 1,000 meters (3,281 ft), has a pleasant climate, with an average high temperature ranging from 30 °C (86 °F) in April, the warmest month, to 25 °C (77 °F) in January, the coolest. Above 2,000 meters (6,562 ft), temperatures can fall to near freezing at night, and frost sometimes occurs.

Rain falls year round in the Caribbean lowlands but is seasonal throughout the rest of the country. Amounts are copious along the north coast, especially in the Mosquitia, where the average rainfall is 2,400 millimeters (94.5 in). Nearer San Pedro Sula, amounts are slightly less from November to April, but each month still has considerable precipitation. The interior highlands and Pacific lowlands have a dry season, known locally as "summer," from November to April. Almost all the rain in these regions falls during the "winter," from May to September. Total yearly amounts depend on surrounding topography; Tegucigalpa, in a sheltered valley, averages only 1,000 millimeters (39.4 in) of precipitation.

Honduras lies within the hurricane belt, and the Caribbean coast is particularly vulnerable to hurricanes or tropical storms that travel inland from the Caribbean. Hurricane Francelia in 1969 and Tropical Storm Alleta in 1982 affected thousands of people and caused extensive damage to crops. Hurricane Fifi in 1974 killed more than 8,000 and destroyed nearly the entire banana crop. In 1998 Hurricane Mitch became the most deadly hurricane to strike the Western Hemisphere in the last two centuries. This massive hurricane not only battered the Honduran coastline, but engulfed nearly the entire country with its powerful winds and torrential downpours. Throughout Central America Mitch claimed in excess of 11,000 lives, with thousands of others missing. More than three million people were either homeless or severely affected. Most Hurricanes occasionally form over the Pacific and move north to affect southern Honduras, but Pacific storms are generally less severe and their landfall rarer.