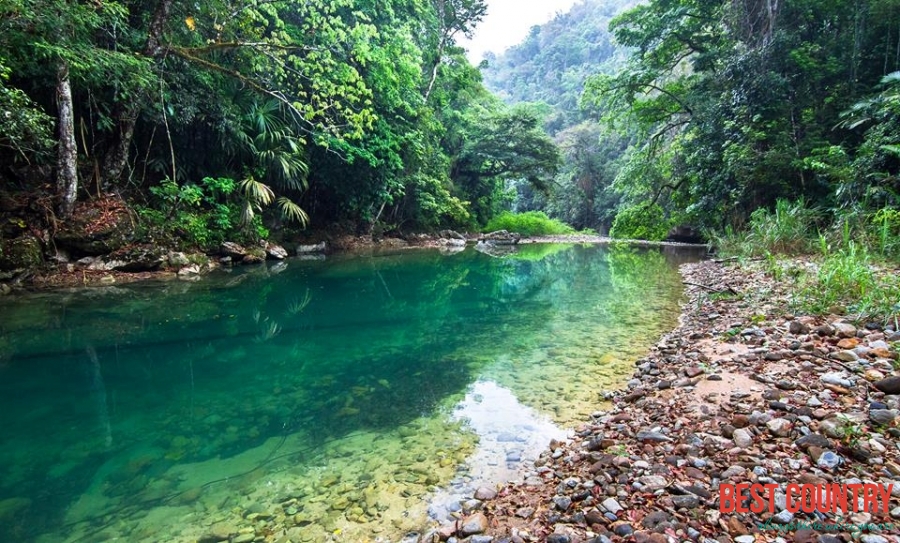 Belize has a tropical climate with pronounced wet and dry seasons, although there are significant variations in weather patterns by region. Temperatures vary according to elevation, proximity to the coast, and the moderating effects of the northeast trade winds off the Caribbean. Average temperatures in the coastal regions range from 24 °C (75 °F) in January to 27 °C (81 °F) in July. Temperatures are slightly higher inland, except for the southern highland plateaus, such as the Mountain Pine Ridge, where it is noticeably cooler year round. Overall, the seasons are marked more by differences in humidity and rainfall than in temperature.

Average rainfall varies considerably, ranging from 1,350 millimeters (53.1 in) in the north and west to over 4,500 millimeters (177.2 in) in the extreme south. Seasonal differences in rainfall are greatest in the northern and central regions of the country where, between January and April or May, fewer than 100 millimeters (3.9 in) of rain fall per month. The dry season is shorter in the south, normally only lasting from February to April. A shorter, less rainy period, known locally as the "little dry," usually occurs in late July or August, after the initial onset of the rainy season.

Hurricanes have played key—and devastating—roles in Belizean history. In 1931 an unnamed hurricane destroyed over two-thirds of the buildings in Belize City and killed more than 1,000 people. In 1955 Hurricane Janet leveled the northern town of Corozal. Only six years later, Hurricane Hattie struck the central coastal area of the country, with winds in excess of 300 kilometers per hour (186 mph) and 4-meter (13.1 ft) storm tides. The devastation of Belize City for the second time in thirty years prompted the relocation of the capital some convert|80|km|mi|0|sp=us inland to the planned city of Belmopan. A hurricane that devastated Belize was Hurricane Greta, which caused more than US$25 million in damages along the southern coast in 1978.

There was a period of 20 years that Belize was considered as a hurricane-free zone by many until Hurricane Mitch (October 1998) caused quite a stir and gave rise to hurricane awareness and the National Emergency Management Organization (NEMO). Two years later Tropical Storm Chantal and Hurricane Keith did much to put the country on the hurricane map. In 2001, Hurricane Iris swept through the southern part of Belize causing damage that ranged in the hundreds of millions due largely to wiping away the banana industry, crippling the citrus and tourism in the area. Six years later, the fury of Category Five Dean landed on the Yucatán coast at Mahahual but Corozal, on northern Belize, was not spared the brunt of reportedly Category 3 to 4 winds. The latter did tens of millions in damages, especially to the infantile papaya industry and to a lesser extent to the endemic sugar cane industry.