Sun, water and the soil in Montenegro play an important role in every part of life. When we are talking about the wine, these three segments merge together giving an aroma to the drink of gods, specific just for this part of Europe.

The south of Montenegro is characteristic by two kinds of grapevine: Vranac and Krstac. Today these are by far known brands which carry the wine from the area of Zeta valley and the area of Crmnica.

On Cemovsko polje (CEMOVSKO FIELD), not far from Podgorica, vineyard which is managed by Plantaze, gives exquisite wine of high quality which undergoes a carrying technological process of production so it is no wonder that nowadays more and more often it is found in the tables in the North America. 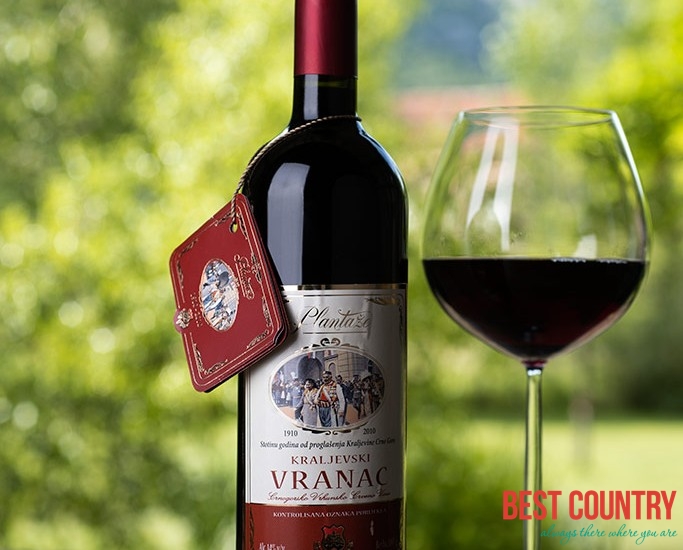 Vranac, black wine – as the red wine is called in the majority of Slov languages, is characteristic for the area of Serbia, Republic of Macedonia, and Montenegro. It is made of extremely coarse and dark grape which is picked from the middle of September to the end of October.

Especially interesting is the way of production of wine in Crmnica which today is almost a cult place when we are talking about the Montenegrin enology. Days of wine and bleak in the nearby Virpazar are an opportunity to meet at least 20 producers who in the technologies which are even several centuries old are producing white and red wine.

Most often they keep it during the year in large barrels made from walnut tree in which the aroma and the taste are preserved in best way, sometimes even for several decades. It is recommendable that it is served at the room temperature, and it goes well with the smoked meat or grilled meat, as well as with all strong cheeses.

Beer - Niksic beer today is a real trademark of Montenegro. With a taste on which much bigger producers in the world would envy it, today it is a regional leader when we are talking about the taste and the quality. Niksic beer is made of barley, hard mountain water and bitter and aromatic hops. It is usually being served cool at the temperature of 5ºC.

It contains 11, 8% of extracts, and about 5% of alcohol. Today on the market you can find it in packages of Nik, Nik Gold, Nik Cool, and Nick dark.

Each of them has its own specific taste, and the connoisseurs of the beer in every occasion know which one to chose. During the summer months extremely refreshing Nik Cool with the lemon or draught dark beer will be a real choice for you. Niksic beer is something you must not miss when we are talking about the offer of drinks on the Montenegrin dining table.

Brandy - Scotland has whiskey, Greece has metaksa, and Montenegro has rakija (BRANDY). Montenegrin vineyards, especially the ones in Zeta valley and Crmnica area are characteristic by the exquisite grapes and even better masters for preparation of this strong alcoholic drink.

The brandy is therefore made from the grapes in special boilers where with the fermentation almost during the whole day, a drop by drop, you get a drink similar to Russian vodka, but stronger and with more aromatic.

Beside the grapes, for the production of brandy in Montenegro apple, especially the small and half wild one from the north of Montenegro, plum and pear are being used. The old Montenegrins boiled it even from the figs and cornel, and the special kind is the one which is made from the fruit of juniper tree.

Each of these brandies bears the name of the fruit from which it is made of, so in that way we can differ "lozovaca" or "loza" (made of grape), "sljivovica" or "sljiva" (made of plum), "krusku" (made of pear) etc.

The most quality brandy, Prvijenac is obtained by the first boiling in the production and beside the fact that it is extremely aromatic it is the strongest brandy according to the so called grades (degrees).

Prvijenac or the first flow of the grape brandy is by far of best quality when we are talking about any kind of the brandy. In some areas the brandy is re - baked with which its aroma, taste, and look are changed and with that we are obtaining "prepecenica" (over baked brandy).

The brandy is served as an aperitif and it goes well with "meze", the famous salty snack. With brandy sometimes slices of some fruit are being served.

There almost doesn’t exist a welcoming and a feast in Montenegro which goes without a brandy and a toast which accompanies it. The technique of production of this beverage is known to almost all households in Montenegro, and for every head of the house his brandy is his pride, and something that you must praise no matter the personal taste.

Today the leading regional producer of top notch wines and brandies Agrokombinat "13 jul" and the enterprise Plantaze offer a wide palette of drinks: Kruna, Prvijenac, and Lozova rakija (GRAPE BRANDY) each of them with a specific taste are dominant on the market and if you wish to take a part of Montenegro with you a quality brandy such as Prvijenac in a stylish package will be the right choice.