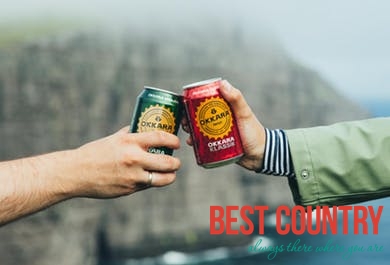 The oldest brewery in the Faroes is called Föroya Bjór, it has produced beer since 1888 with exports mainly to Iceland and Denmark, it was originally located in Klaksvík, but after bying and merging with Restorff's Bryggjarí in Tórshavn, Føroya Bjór is now also located in the capital.

The beer brewery Okkara was established in 2010, located in Velbastaður.

Hard alcohol like snaps was not allowed to be produced in the Faroe Islands until 2011, hence the Faroese aquavit, Aqua Vita, and other kind of alcoholic beverages like Eldvatn and Havið, made by the Faroese company DISM, were produced abroad.

But in May 2011 the Faroese gowernment made a new law which allowed Faroese breweries and distilleries to brew strong beer and alcohol.

DISM was established in 2008, the company is better known by the name of their first product which was Lívsins Vatn.