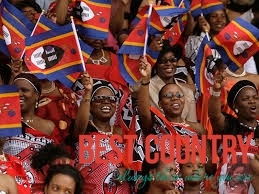 Swaziland is a largely religious society, with Christianity, and Swazi traditional religion being the most popular religions.According to Religious intelligence, 82.70% of the total population adheres to Christianity, making it the most common religion in Swaziland.

Anglican, Protestant and indigenous African churches, including African Zionist, and Roman Catholics constitute the majority of the Christians in the country.

On 18 July 2012, the Rev Ellinah Wamukoya, was elected Anglican Bishop of Swaziland, becoming the first woman bishop in Africa. 14.70% of the population follows traditional religions; other non-Christian religions practised in the country include Islam (0.95%), the Bah; Faith (0.5%), and Hinduism (0.15%).

There are 14 Jewish families. According to the US State Department religious freedom report of 2012, the percentage distribution of religious practices in the country is 90% Christian, 2 percent Muslim, while under 10% belong to other religious groups.

According to the CIA world fact book, the distribution is 40% Zionist, 20% Roman Catholic, Muslim 10%, other (includes Anglican, Baha'i, Methodist, Mormon, Jewish) 30%. In other sources such as Clay Potts, the religious demographics are 80% Christian, and 20% Traditional Swazi religion.

The Constitution of the Kingdom, which went into effect on February 8, 2006, provides for freedom of religion. The Government respects freedom of religion.There have been reports, as of 2012 of societal discrimination based on religious affiliation, belief, or practice.

The traditional Swazi religion recognizes a supreme God/creator, but more important are the spirits of ancestors. Swazi religion speaks of a creator known as Mvelincanti (he who was there from the beginning). However, Mvelincanti is too remote and so it is ancestral spirits emadloti is more relevant in day-to-day life.

Beasts are slaughtered and beer was brewed to please (propitiate) the spirits, and ask for help. The rituals are performed at the level of family associated with birth, death and marriage.Some Swazis blend these traditions with contemporary Christian practices.

In the hierarchy of Swazi society, the king assumes the leadership position. The incwala ritual, which is performed annually, is considered a national religious event. The objectives of the event are to reflect the growth of the king,[8] and to thank the ancestors for good harvests and to pray for good rain in the coming year. This event, which only takes place when there is a king, is the most sacred national event and all male Swazis are participant. The holiday for incwala depends on the phases of the moon, and is at the end of the six week event.

The first church to be established in the country was the Methodist Wesleyan Mission was established in Mahamba in 1844. The Missionaries were welcomed by the then king of Swaziland, Mswati II. A Gothic-style church, which was built in 1912, still stands in Mahamba, and is the oldest existing place of worship in the country A large Roman Catholic presence, including churches, schools, and other infrastructure, exists in the country.

The country forms a single diocese - the Diocese of Manzini. The Zionist Churches, which blend Christianity and indigenous ancestral worship, and were developed in the early part of the 19th century, predominate in rural areas. Christian holidays such as Good Friday, Christmas, Ascension Day are part of the national holiday calendar.

Followers of Islam, Judaism and the Baha'i Faith are largely immigrants located in urban areas. According to the US State department, Islam forms about 2% of the population, while according to the CIA world fact book, it constitutes 10%.Nearly all Muslims in Swaziland are Sunni. However, there are a small number of Ahmadi Muslims also. Most immigrants from South Asia practice Islam.