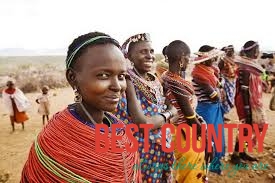 Approximately half of the country's population practice traditional religion,which tends to emphasize links between the living and the razana (ancestors).

The veneration of ancestors has led to the widespread tradition of tomb building, as well as the highlands practice of the famadihana, whereby a deceased family member's remains may be exhumed to be periodically re-wrapped in fresh silk shrouds before being replaced in the tomb.

The famadihana is an occasion to celebrate the beloved ancestor's memory, reunite with family and community, and enjoy a festive atmosphere. Residents of surrounding villages are often invited to attend the party, where food and rum are typically served and a hiragasy troupe or other musical entertainment is commonly present.

Consideration for ancestors is also demonstrated through adherence to fady, taboos that are respected during and after the lifetime of the person who establishes them. It is widely believed that by showing respect for ancestors in these ways, they may intervene on behalf of the living.

Conversely, misfortunes are often attributed to ancestors whose memory or wishes have been neglected. The sacrifice of zebu is a traditional method used to appease or honor the ancestors. In addition, the Malagasy traditionally believe in a creator god, called Zanahary or Andriamanitra.

Almost half the Malagasy are Christian, with practitioners of Protestantism slightly outnumbering adherents to Roman Catholicism.In 1818 the London Missionary Society sent the first Christian missionaries to the island, where they built churches, translated the Bible into the Malagasy language and began to gain converts.

Beginning in 1835 Queen Ranavalona I persecuted these converts as part of an attempt to halt European cultural and political influence on the island. In 1869 a successor, Queen Ranavalona II, converted the court to Christianity and encouraged Christian missionary activity, burning the sampy (royal idols) in a symbolic break with traditional beliefs.

Today, many Christians integrate their religious beliefs with traditional ones related to honoring the ancestors. For instance, they may bless their dead at church before proceeding with traditional burial rites or invite a Christian minister to consecrate a famadihana reburial.

The Malagasy Council of Churches comprises the four oldest and most prominent Christian denominations of Madagascar (Roman Catholic, Church of Jesus Christ in Madagascar, Lutheran, and Anglican) and has been an influential force in Malagasy politics.

Islam is also practiced on the island. Islam was first brought to the island in the Middle Ages by Arab and Somali Muslim traders, who established several Islamic schools along the eastern coast. While the use of Arabic script and loan words and the adoption of Islamic astrology would spread across the island, the Islamic religion failed to take hold in all but a handful of southeastern coastal communities.

Today, Muslims constitute 7 percent of the population of Madagascar and are largely concentrated in the northwestern provinces of Mahajanga and Antsiranana. The vast majority of Muslims are Sunni. Muslims are divided between those of Malagasy ethnicity, Indians, Pakistanis and Comorians.

More recently, Hinduism was introduced to Madagascar through Gujarati people immigrating from the Saurashtra region of India in the late 19th century. Most Hindus in Madagascar speak Gujarati or Hindi at home.