Cuisine of Madagascar traditionally consists of a base of rice (vary) with some form of accompaniment (laoka), although in the southwest rice may be supplemented or replaced by maize that has been dried, ground and reconstituted. Cuisines of France, China, India, and to a lesser extent East African and Arabian cultures have all made their influence felt in Madagascar. 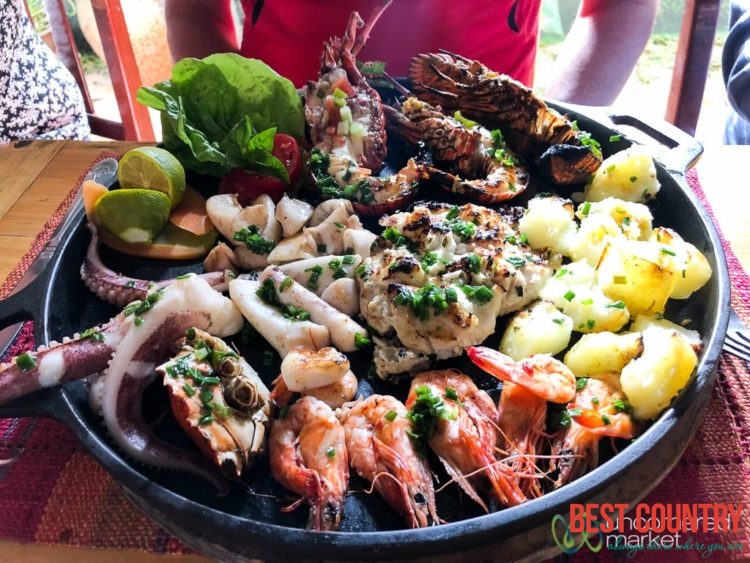 A variety of rice strains, both locally grown and imported, are available for purchase in the markets. The grain may be prepared with varying amounts of water to produce a soupy rice (vary sosoa) or a dry rice. It is not uncommon for those who can afford it to offer more than one type or preparation of rice at a meal. A drink called ranon'ampango is made by adding water to the toasted rice left sticking to the interior of its cooking pot, and is served at every meal as a sanitary and tasty alternative to water.

Vary amin'anana is a popular traditional stew made with rice, meat and chopped greens. For breakfast, rice may be sprinkled with sugar (and optionally, a sliced fruit such as banana), or eaten with a laoka of fried egg or sausage. Among the well-to-do, rice may be replaced at breakfast by French bread spread with butter (and occasionally sugar or sweetened condensed milk).

The accompaniment served with rice varies according to what is locally available and in season of winter. Among the most common laoka are voanjobory (Bambara peas flavored with pork), kitoza (seasoned dried strips of zebu- local humped cattle), trondro gasy (fish), ravitoto (shredded cassava leaves with peanuts or pork), beef (henan'omby) or chicken (akoho) sauteed with ginger, romazava (beef and mixed greens sauteed with ginger, tomato and onion), tsaramaso (beans in a tomato sauce), and various types of seafood, which are more readily available along the coasts or in large urban centers.

Garlic, onions, ginger, tomatoes, mild curry, and salt are the most common ingredients used to flavor most dishes, although in coastal areas coconut milk, vanilla and spices such as cloves or turmeric may also be used.

Extremely spicy foods are less widely popular in Madagascar than in some parts of mainland Africa, although chile paste (sakay) and Indian-style condiments made of pickled mango, lemon, and other fruits (known as achards), are often served. An achard-like salad of green beans, cabbage, carrots and onion in a vinaigrette sauce (called lasary) is especially popular as a side dish - or as the filling of a baguette sandwich - in the Highlands.

A variety of sweets like cakes and fritters (collectively known as mofo, or bread) are available from kiosks in towns and cities across Madagascar. The most common is mofo gasy (Malagasy bread), made from a batter of sweetened rice flour that is poured into greased circular molds and cooked over charcoals.

Mofo gasy is a popular breakfast food and is often eaten with coffee (also sold at kiosks). Other sweet mofo include mokary (mofo gasy flavored with shredded coconut), mofo baolina (a deep-fried corn flour doughnut) and fruit fritters (pineapple and bananas being among the most common fruits used). Savory mofo include ramanonaka (similar to mofo gasy but salted and fried in lard), and mofo sakay (spicy bread), a fritter flavored with chopped greens, onions, tomatoes and chillies.

Koban-dravina is a Malagasy speciality made by grinding together peanuts and brown sugar, then enveloping the mixture in a sweetened rice flour paste to produce a cylindrical bundle. The bundle is wrapped in banana leaves and boiled for 24-48 hours or longer until the sugar caramelizes and the peanuts have softened. The resulting cake is served in thin slices. As a result of French colonization, baguettes are still one of the most commonly sold and enjoyed breads in Madagascar.

Koba akondro is a sweet that is commonly sold at rest stops or gas stations and is made by wrapping a batter of ground peanuts, mashed bananas, honey and corn flour in banana leaves and steaming or boiling the small cakes until the batter has set.

Traditionally, fresh fruit may be eaten after a meal as a dessert. Fresh sugarcane is also occasionally enjoyed as a treat. A great variety of temperate and tropical fruits are grown locally and are often enjoyed sprinkled with sugar.

Temperate fruits found in Madagascar include but are not limited to apples, lemons, pumpkins, watermelon, oranges (whose peel often remains green even when ripe), cherries and strawberries. Among the many tropical fruits commonly eaten in Madagascar are coconut, tamarind, mango, pineapple, avocado and guavas, as well as longans, lychees, "pok-pok" (voanantsindrana, similar to a physalis), persimmon, and the fruit of the baobab tree, which is only available during a brief period near the end of the rainy season (typically March).

Madagascar is known for its high-quality cocoa, and Antananarivo-based Chocolaterie Robert [4]produces excellent fresh chocolate bars, truffles and a variety of other treats using local cocoa. Dark, light and (to a lesser extent) white chocolate bars are available in neighborhood shops across the country, while other chocolate delicacies are primarily made available at the main chocolaterie itself in the capital city, in upper-scale hotels, or in the classier gift shops in major cities and airports.

A firm, cake-like coconut milk pudding known as godro-godro is a popular dessert. French pastries and cakes are also very popular across the island and may be purchased at the many patisseries found in towns and cities throughout Madagascar.