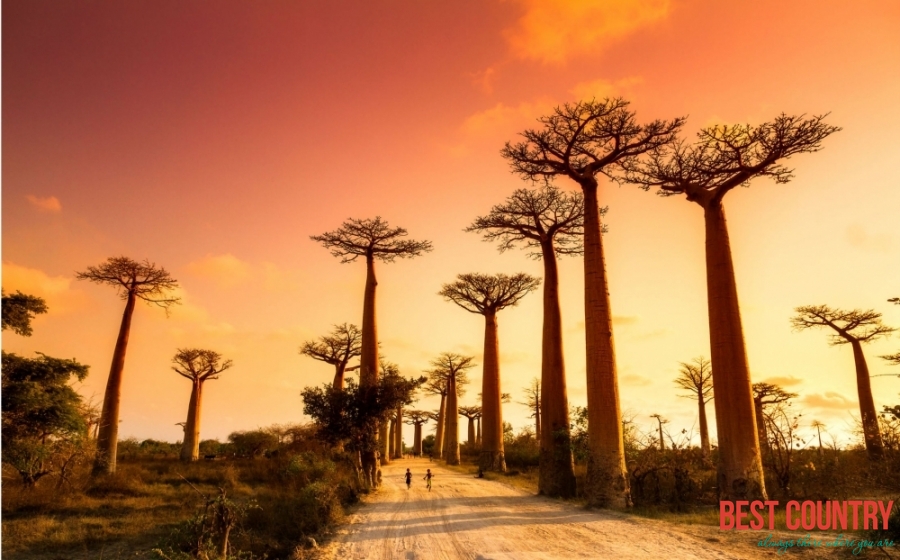 The climate is tropical along the coast, temperate inland, and arid in the south.

The weather is dominated by the southeastern trade winds that originate in the Indian Ocean anticyclone, a center of high atmospheric pressure that seasonally changes its position over the ocean.

Madagascar has two seasons: a hot, rainy season from November to April; and a cooler, dry season from May to October. There is, however, great variation in climate owing to elevation and position relative to dominant winds. The east coast has a subequatorial climate; being most directly exposed to the trade winds it has the heaviest rainfall, averaging as much as 3,500 mm (137.8 in) annually. This region is notorious for a hot, humid climate in which tropical fevers are endemic and also for the destructive cyclones that occur during the rainy season, coming in principally from the direction of the Mascarene Islands. Because rain clouds discharge much of their moisture east of the highest elevations on the island, the central highlands are appreciably drier and, owing to the altitude, also cooler. Thunderstorms are common during the rainy season in the central highlands.

Antananarivo receives practically all of its average annual 1,400 mm (55.1 in) of rainfall between November and April. The dry season is pleasant and sunny, although somewhat chilly, especially in the mornings. Although frosts are rare in Antananarivo, they are common at higher elevations.

Although hail falls on many of the higher areas of the island (including Antananarivo), there is no snowfall except on the Ankaratra massif where above 2,400 m (7,874 ft) it may occasionally fall and even remain for several days.

The west coast is drier than either the east coast or the central highlands because the trade winds lose their humidity by the time they reach this region. The southwest and the extreme south are semidesert; as little as 330 mm (13 in) of rain falls annually at Toliara. Overall, surface water is most abundant along the east coast and in the far north (with the exception of the area around Cap d'Ambre, which has relatively little surface water). Amounts diminish to the west and south, and the driest regions are in the extreme south.

Madagascar occasionally experiences the impact of cyclones. February 2-4, 1994, Madagascar was struck by Cyclone Geralda, the worst cyclone to come ashore on the island since 1927. The cyclone killed seventy people and destroyed enough property to leave approximately 500,000 homeless, including 30,000 in Antananarivo and 80,000 in Toamasina. The cyclone also significantly damaged the country's infrastructure, most notably coastal roads, railroads, and telecommunications, as well as agriculture. Damage was estimated at US$45 million.