Religion in the Federated States of Micronesia 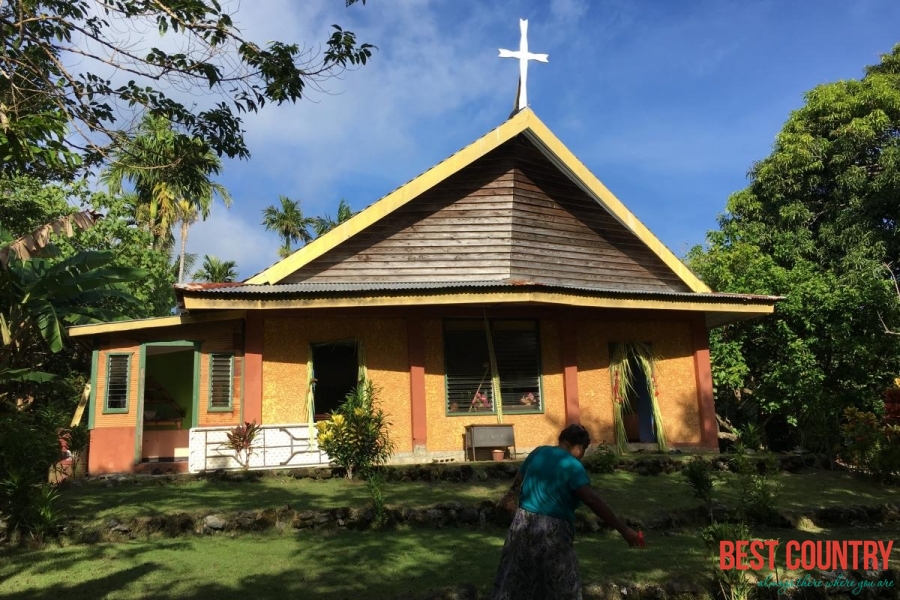 Several Protestant denominations, as well as the Roman Catholic Church, are active in every Micronesian state. Most Protestant groups trace their roots to American Congregationalist missionaries. On the island of Kosrae, the population is approximately 7,800; (95% Protestant). On Pohnpei, the population of 35,000 is evenly divided between Protestants and Catholics (50% catholic & 50% Protestant).

On Chuuk and Yap, (an estimated 60% Catholic & 40% Protestant). Religious groups with small followings include Baptists, Assemblies of God, Salvation Army, Seventh-day Adventists, Jehovah's Witnesses, the Church of Jesus Christ of Latter-day Saints (Mormons), and the Baha'i Faith. There is a small group of Buddhists on Pohnpei, (0.7% buddhist) (population as of 2010). Attendance at religious services is generally high; churches are well supported by their congregations and play a significant role in civil society.

Most immigrants are Filipino Catholics who have joined local Catholic churches. The Filipino Iglesia Ni Cristo also has a church in Pohnpei. In the 1890s, on the island of Pohnpei, intermissionary conflicts and the conversion of clan leaders resulted in religious divisions along clan lines which persist today.

Protestants are the majority on the western side of the island, while Catholics are the majority on the eastern side. Missionaries of many religious traditions are present and operate freely. The Constitution provides for freedom of religion, and the Government generally respected this right in practice. The US government received no reports of societal abuses or discrimination based on religious belief or practice in 2007.