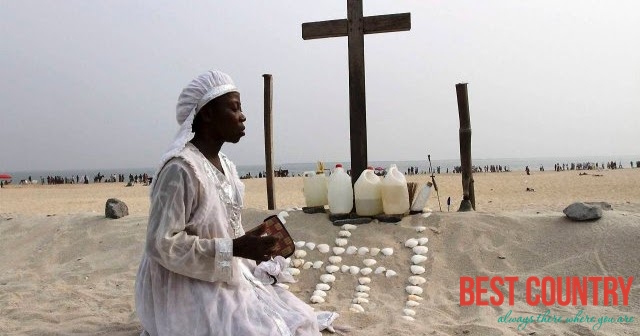 Islam is the dominant religion in Niger and is practiced by 80 to more than 98 % the population.

Approximately 95% of Muslims are Sunni; 5% are Shi'a.Islam was spread into what is now Niger beginning in the 15th century, by both the expansion of the Songhai Empire in the west, and the influence of the Trans-Saharan trade traveling from the Maghreb and Egypt.

Tuareg expansion from the north, culminating in their seizure of the far eastern oases from the Kanem-Bornu Empire in the 17th centuries, spread distinctively Berber practices. Both Djerma and Hausa areas were greatly influenced by the 18th and 19th century Fula led Sufi brotherhoods, most notably the Sokoto Caliphate (in today's Nigeria).

Christianity was brought with French colonial institutions, and its adherents include local believers from the educated, the elite, and colonial families, as well as immigrants from neighboring coastal countries, particularly Benin, Togo, and Ghana.

Christians, both Roman Catholics and Protestants, account for less than 5 percent of the population—one estimate has Christians at 0.4% and Evangelicals at 0.1%—and are mainly present in the regions of Maradi and Dogondoutchi, and in Niamey and other urban centers with expatriate populations. Current estimates place the current Christian population at about 56,000 individuals with projected growth resulting in about 84,500 Christians by the year 2025.

Foreign Christian missionary organizations are active in the country, continuing a tradition dating back to the colonial period. The first Catholic mission was founded in 1931, while the first Protestant missionaries came to Zinder in 1924 and to Tibiri a few years later. In the late 1970s there were some 12,000 Catholic and 3,000 Protestant converts in Niger, with the remaining Christian population made up of foreigners.

The Bah Faith in Niger began during a period of wide scale growth in the religion across Sub-Saharan Africa near the end of its colonial period. The first Bah;s arrive in Niger in 1966[7] and the growth of the religion reached a point of electing its National Spiritual Assembly in 1975.

Following a period of oppression, making the institutions of the religion illegal in the late 1970s and 80s, the National Assembly was re-elected starting in 1992. The Bah community in Niger has grown mostly in the south-west of the country where they number about 5,600 (0.04% total population.)

A small percentage of the population practices traditional indigenous religious beliefs. Although studies estimate that such practitioners number around 1,055,000 individuals, or about 6.6% of the total population, such numbers can be misleading as there is a high rate of syncretism within Muslim communities throughout the country.

Animist beliefs include both animist based festivals and traditions (such as the Bori cult) practiced by some syncretic Muslim communities (in some Hausa areas as well as among some Toubou and Wodaabe pastoralists), as opposed to several small communities who maintain their pre-Islamic religion. These include the Hausa speaking Maouri (or Arna, the Hausa word for "pagan") community in Dogondoutci in the south-southwest and the Kanuri speaking Manga near Zinder. both of whom practice variations of the pre-Islamic Hausa Maguzawa religion. There are also some tiny Boudouma and Songhay animist communities in the southwest.

The Constitution of Niger provides for freedom of religion, and the government generally respects this right in practice, as long as persons respect public order, social peace, and national unity. The US government received no reports of societal abuses or discrimination based on religious belief or practice in 2007.

Niger has a history of good relations between the majority Muslim believers and the much smaller minority faiths. In 2008, the Roman Catholic Archbishop of Niamey Mgr Michel Cartatguy was quoted in the press as saying that Niger is one of the "best examples" of cohabitation and cooperation between Christians and Muslims.