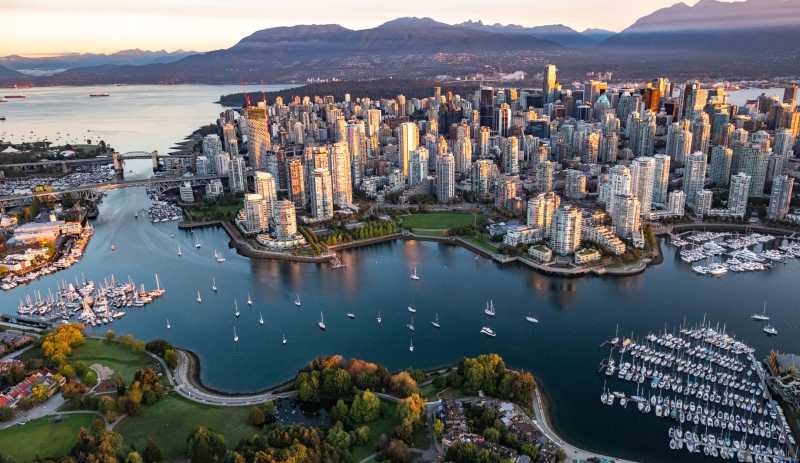 A shining city of towers and islands, surrounded by beaches and backed by snow-capped mountains, Vancouver is a young city with one ear tuned to the call of the wild and the other to the future.

For the outdoors lover, it is paradise; for the foodie, the Asian cuisine here is some of the best in the world; and for the urbanist, there is a lively and growing multicultural scene linked by excellent public transport. Add to all that, views of the peaks across English Bay, green Stanley Park and the sandy beaches that fringe the city.

These are what draw an ever-growing population to this fresh-air city on the Pacific Ocean. And new residents are coming from all over Canada, Asia and far flung points around the globe.

What is it known for?

Vancouver may have had its moment in the spotlight during the 2010 Winter Olympics, but it consistently ranks high on many of the world`s best places to live lists. In fact, it has claimed the number one spot for two years running on the Economist Intelligence Unit`s ranking of the most liveable cities.

The access from a booming and dense downtown to the great outdoors is nearly unrivalled in North American cities. Nearby options include kayaking around the city, skiing on frosted peaks and mountain biking through the rainforest. "It`s a giant playground," said Julie Desaulniers, a transplant from Montreal who lives in North Vancouver with her family. "The north shore is a mountain biking mecca and I run on rainforest trails every weekend."

Hollywood has set up permanently in Vancouver and it is where many movies and TV shows are filmed, including the Twilight series. Enterprising folks have even set up tours for the Twi-hards who come seeking some scent of Bella and Edward.

Like Seattle to the south, Vancouver has a thriving coffee culture and hipster cafes, but it also has the best Chinatown in North America, amazing sushi and a sophisticated Asian fusion cuisine, all thanks to the city`s sizeable Asian population. "The first thing I have when I come home after being away is the sushi," said Desaulniers.

Where do you want to live?

The West Side of Vancouver should not be confused with the West End, which sits across False Creek, or with West Vancouver across the Burrard Inlet. Neighbourhoods on the West Side, like Kitsilano, are popular because they are near the beach, close to downtown and have a funky, youthful character. East of Commercial Drive, things are a bit edgier, as is south of Main Street (SoMa), but both are filled with alterna-boutiques, galleries and restaurants. "The best value for money can be found in East Vancouver," said Don Campbell, president of Real Estate Investment Network." He says people who cannot afford downtown are buying in those areas, particularly anywhere that is within half a mile walking distance to the SkyTrain stations.

The downtown business district and Coal Harbour are popular for condo dwellers who want killer views across the water, and the Olympics gave construction a boost along Southeast False Creek, the body of water that separates the West End from the West Side. "While the former athletes` village turned out to be a boondoggle, the Olympics spurred construction along False Creek that has done very well," said Campbell.

Across the Burrard Bridge, North Vancouver is home to young families, as is the tiny West Vancouver district where many ex-patriots and retirees also live. Surrey, a municipality south of the city - whose mayor was rated one of the best in the world - is becoming the second central business district for the metro Vancouver area and is linked by SkyTrain to downtown.

You are spoiled for choice when it comes to weekends away. Whistler is an hour and a half from downtown, and while winter there is all about skiing, in summer, you have access to great mountain biking, fishing and golfing. Many Vancouverites head south to Vancouver Island or one of the Gulf Islands, reachable by ferry. Tofino on Vancouver Island`s west coast is a favourite with surfers and close to the Pacific Rim Natural Park.Another popular getaway is Okanagan Valley, about a four-hour drive east with a completely different microclimate - more like Napa or Willamette valleys. Vineyards and bed-and-breakfasts cling to the shores of Naramata Lake, and a wine festival is held every autumn.

Seattle is only a two and a half hour drive south and San Francisco is a two-hour flight away. Many routes to and from Asia come through Vancouver`s light-filled, modern international airport.

Vancouver has seen an influx of foreign investment in recent years, specifically from Asia, particularly mainland China, and the Middle East. The cash flow has buoyed prices and kept the market strong. "Internationals are coming to park money here," explained Campbell. "It is politically stable, as is the Canadian dollar, and they see it as a safe place." Additionally, new mass transit projects, like the one that will link Port Moody and Coquitlam to Vancouver via the Evergreen Line (expected to be complete by 2015), are giving the market a boost. "The federal government is building transit infrastructure and that has really helped the real estate market," said Campbell.

There is high demand for condos and row houses, and new releases of condo projects still cause a frenzy. "The hot property right now are condos," said Campbell. "Especially in the area where the Expo and the Olympic Village are." There are two price brackets with the most activity currently: $500,000 to $700,000 and over $1 million (all Canadian dollars). Vacancy is low in the rental market, and there are strong rent controls, so the rents do not increase rapidly. However, once a tenant moves out, the unit goes back to market rate and that has gone up 10%in the last two years.

Vancouver is surrounded by the ocean, mountains and agricultural land, and because of these geographic restrictions around the city, the land is getting used up quickly. However, that same prospect is what draws so many people. "The real benefit to living here is the geography," said Desaulniers. "Living on the ocean surrounded by snow-capped mountains - it`s just really beautiful."