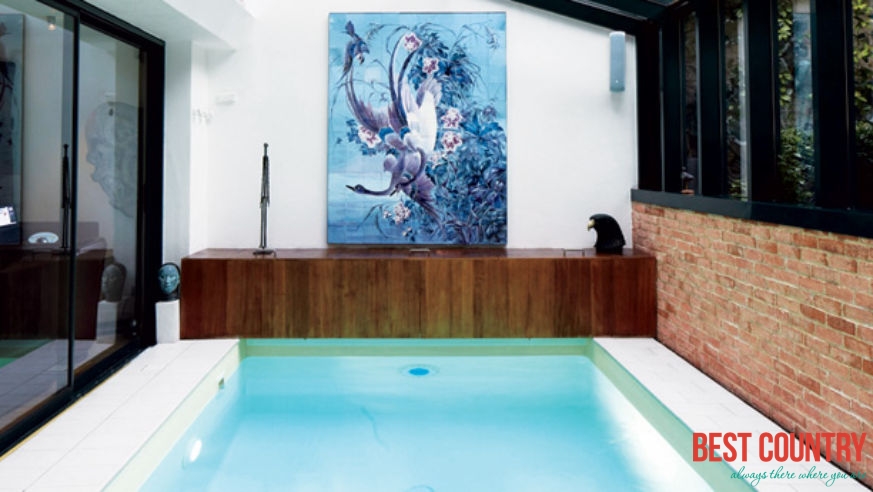 In a city known more for romance than thrift, there are still hotels that combine the best of both. Here are six blessedly under-the-radar options—spread across some of the city's most charming arrondissements—all for well under $200 a night.

A hidden gem high above the rooftops

Constructed in 1895 as a gift from a banker to his mistress, the 12-room Ermitage Hôtel Sacré-Coeur is a relic in the best sense of the word. The landmarked building, on a hillside near the Montmartre cathedral, has had only five owners, a rare continuity that enhances the hotel's trapped-in-amber feeling. The current proprietors, the Canipel family, have held the keys for 36 years, and their heirlooms (a grandfather clock from the 1800s, a turn-of-the-century wood china cabinet) are perfect complements to the English floral tapestries that appear everywhere from footstool to ceiling. Modern conveniences are notably absent—don't expect central A/C or an elevator. But while the dated atmosphere may seem like a by-product of neglect, every choice at the Ermitage is deliberate, from the cash-only rule (which helps keep prices low) to the no-TV policy ("You can always hear a television through the walls," explains Sophie Canipel, the hotel's manager). Canipel even maintains a strict reservations policy: only by phone. "It's just friendlier to talk directly with someone," she explains. "You can answer specific questions much more easily that way." Such singular attention to comfort keeps guests coming back, time and again. A handful of American families have returned to Ermitage every year for three decades, and a number of repeat visitors first stayed here as small children. Each regular has his or her favorite room—the two garden-level doubles (with their matching terraces perfectly positioned to catch the sunrise) are particularly popular. Whatever their history with the hotel, everyone is treated to one pretty sweet perk: A daily breakfast of just-baked croissants, strong European-style coffee, and fresh-squeezed orange juice, delivered right to your door. 18th arrondissement, 24 rue Lamarck, ermitagesacrecoeur.fr, from $131, breakfast included.

Raised by two hoteliers in the Alpine resort town of Val d'Isère, Laurence Raymond, owner of the Hôtel Mayet in Paris's Les Invalides neighborhood, has hospitality in her blood. So it makes a certain kind of sense that her own foray into the family business would take tongue-in-cheek inspiration from an office building. Upstairs, the 23 rooms stick to a bold gray-and-crimson color scheme, with oversize analog clocks, and file cabinets instead of bedside tables. Downstairs, the Mayet's lobby serves as the office building's no-rules break room. Two brightly colored, abstract murals—one by graffiti artist and bad-boy-about-town André, featuring his signature "Mr. A" motif; the other a swirling, fantastical work by another big-name local tagger, JonOne—instantly set a playful tone. The twin lounge areas flanking the front door are filled with Raymond's flea-market finds (a metallic saddle-seat stool at the computer station), art-show objects (wing-shaped pendant lamps), and stacks of books and magazines. Add to those surprising touches a rainbow-striped floor in the breakfast room and a stack of free postcards (with stamps included) at the reception desk—and it becomes quite clear that the Hôtel Mayet is anything but institutional. 6th arrondissement, 3 rue Mayet, mayet.com, free Wi-Fi, from $177, breakfast included.

A classic remade for modern travelers

For 130 years, the seven-story building that houses the Hôtel de la Paix earned its keep hosting French business travelers drawn to its reasonable prices, attentive service, and central location, a seven-minute walk from Jardin du Luxembourg in Montparnasse. But thanks to a transformation at the hands of Charlotte and Georges Ferrero, who bought the 39-room property in March 2009, the hotel is now welcoming guests in town just as much for weekend sightseeing as weekday work. "Before, we used to be booked Monday through Friday but so quiet on weekends and in August," says Daniele Letourneau, who has run the front desk for the past 13 years. "Now we're busy all the time." While many hotels in Paris gravitate toward opposite ends of the style spectrum—spare at one extreme, prim at the other—Hôtel de la Paix forges its own inviting look: a modern take on a 1950s French schoolhouse. In the rooms, pale-painted walls and white linens pair with wooden window shutters repurposed as headboards; vintage educational posters and school desks with articulated task lamps serve as accents. A jumble of antiques collected on Charlotte's various excursions to the countryside—a set of weathered, leather-bound dictionaries, a scale model of a schooner encased in glass—punctuate the comfy communal seating area. And when it's time to join the passersby making their way to the area's famous cafés, guests need look no further than the front desk to assess the weather. There, a chalkboard is updated each morning with a hand-scribbled forecast, complete with charming drawings of sunbeams, clouds, and raindrops, depending on the day. 14th arrondissement, 225 blvd. Raspail, paris-montparnasse-hotel.com, free Wi-Fi, from $114, breakfast $12.

A touch of history in the heart of the city

A few things might come to mind when you imagine a typical Parisian hotel: elaborate, old-world decor; a picturesque setting on a narrow, café-lined street; and, perhaps, a generous helping of haughty Gallic attitude. Fortunately, the Hôtel de la Bretonnerie delivers on all but the latter. The late-17th-century building in the art-focused Marais is rife with period details like floral-patterned wall coverings, antique engravings, and exposed beams—so much so that it's become a popular backdrop for photo shoots by Japanese and French fashion magazines. No two of the 29 guest rooms are alike: Some have high ceilings, some low; there are duplexes and singles, and even a pair of rooms with double sinks and vanities, perfect for groups of girlfriends traveling together. In spite of all that quirky aesthetic appeal, the hotel's savvy, solicitous staff is truly its most valuable asset. After directing each guest to the ideal room—an essential service, since they vary so widely—the staff sets about tailoring advice to each visitor's needs. The hotel's four front-desk agents, who speak a combined total of seven languages, regularly scour their corner of Paris for new restaurants, shops, and arts spaces worthy of endorsement. Each agent has his or her specialty: Ask Olga for opera and classical-music performances, Ludivine for food and local history, Patrick for theater and cinema, and Karen for jazz clubs, bars, and vintage clothing and design boutiques, many of which are within a short walk of the hotel's front door. 4th arrondissement, 22 rue Sainte Croix de la Bretonnerie, bretonnerie.com, free Wi-Fi, from $182, breakfast $13.

In a neighborhood that's been wholly transformed over the past two decades—from a ramshackle cluster of artists' studios and blue-collar businesses to a bona fide boho paradise—Hélène and Jean-Louis Bignon are a constant. When they first moved to Montmartre in 1974, "it was more or less the 19th century here," Jean-Louis says. Their street, which was once home to a veterinary hospital and a mechanic's garage, now houses an advertising firm, a graffiti-splashed record store, an outlet shop for French clothing brand A.P.C., and Chéri Bibi, a casually hip restaurant that fills with a boisterous, under-40 crowd most nights. Carved out of the Bignons' own three-story home, Paris-Oasis—which includes three detached, converted units, plus two upper-floor apartments in the main building—can accommodate up to 15 people. The rooms are designed to sleep one to five guests, and each unit has a private bath and a kitchenette stocked with water, juice, soda, coffee, and beer. Although there's no breakfast service, in-room Nespresso machines dispense both American and European-style coffee, and it's only about 15 paces from the front door to the nearest bakery. Of the five room options, the Iris is the most secluded: It's hidden in the greenery of the back garden—beyond the solarium and Paris-Oasis's heated swimming pool—and it has its own dining terrace surrounded by rose bushes and a birdbath. A more spacious choice is the Liette suite, a proper one-bedroom apartment with a fully equipped kitchen, reached by an elevator furnished with an antique theater chair upholstered in faux leopard print. Nearly every nook of Paris-Oasis acts as an exhibition space for pieces from the Bignons' eclectic art collection. A pair of 19th-century Longwy tile murals bought in an antiques shop in the south of France hang at opposite ends of the pool room, and a goatskin miniskirt from a Himba settlement in Namibia occupies a prominent living room shelf. Some of the most original pieces of all are where you'll least expect them: Look closely and you'll spot a black-velvet painting of a tiger tucked away in the stairwell. 18th arrondissement, 14 rue André del Sarte, paris-oasis.com, free Wi-Fi, from $163, three-night min., breakfast not included.

A Room in Paris

A B&B with gourmet appeal

Of the approximately 500 registered chambres d'hôtes (bed-and-breakfasts) in Paris, the majority are run by empty nesters looking to make the most of a spare room without committing to a life of full-time service. Peet Verrest is not one of those people. At his recently expanded, five-room B&B, simply called A Room in Paris, Verrest takes his job seriously. So seriously, in fact, that he put his hospitality to the test last summer in a competitive dinner-party-hosting reality-TV show, Un Dîner Presque Parfait (An Almost Perfect Dinner). "I considered it a kind of French exam," the Dutch-born Verrest explains. Given that he went home the winner, we'll say he passed. All that effort works out very well for guests: Each morning, Verrest lays out a spread made up of meats and cheeses, his own bread and preserves (rhubarb, apricot, plum), and homemade treats like a clafoutis de Limoges tart. The meal is served at a communal table set with mismatched plates in the living room, which is decorated with oil paintings by contemporary artists. The B&B's location, a two-minute walk from the Gare du Nord, has its ups and downs: While it's the first stop on the express train from the Charles de Gaulle airport, it's also a 20-minute bus or 10-minute Métro ride from top attractions (Notre-Dame, the Louvre). But the slightly out-of-the-way location buys plenty of luxuries—11-foot ceilings with ornamental moldings dating to the late 1800s, original herringbone-wood floors, and rooms as large as 300 square feet. Other details are no less grand. Marble fireplaces serve as displays for stylized animal figurines and carefully chosen antiques, the result of a collaboration between Verrest—a former export manager for an architectural supply company—and his partner, Thierry Taillez. "We only have a little taste in common," Verrest explains. "But when it works, it's good." 10th arrondissement, 130 rue LaFayette, aroominparis.com, free Wi-Fi, from $95, breakfast included.