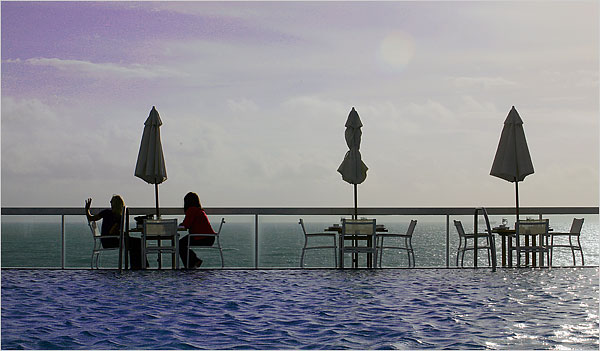 Since it opened in Manhattan in 2004, the Gansevoort Hotel, with its rooftop pool overlooking the meatpacking district, has been generating buzz. The owners hoped to take that buzz to South Beach, where they bought a vast 1960s building called the Roney Plaza and carved out a 334-room hotel along one edge.

(The rest of the building is reserved for condominiums.) Their masterstroke was persuading David Barton, of the eponymous gym chain, to open a large and gorgeously designed branch in the same complex. The gym is so dramatic that it was the talk of South Beach during Art Basel Miami Beach in December. Another inspired idea: renting space on the third floor to Wilhelmina Models, guaranteeing a flow of gorgeous people through the lobby.

A few years ago, this hotel — along the beach at 23rd Street and Collins Avenue — would have been considered too far from the action. But now Mid-Beach is becoming the new party spot, thanks in part to the Gansevoort and other fashionable hotels like the newly sexy Fontainebleau and the soon-to-open W.

My standard room, number 619, was gigantic, about 600 square feet. The hotel had done its best to fill the space with a huge turquoise coffee table, a sofa, lounge chairs, a dining table with four chairs, a glass-topped writing table, a large credenza — and, of course, the king-size bed. Still, there would have been enough room for a Ping-Pong table in the corner. Although my room faced the always-packed avenue, I didn’t hear a thing. The decor is modern but spare, with a gray carpet and with just a few framed black-and-white photos on the beige walls.

Also oversized, with a large, deep tub, a huge glass shower, a vanity with two sinks, and still plenty of room to walk around. If there’s a complaint, perhaps there was a little too much dark gray granite, as though it were the interior of a quarry.

About 7:30 a.m., I ordered an omelet, toast and a cup of green tea. “Give me 20, 25 minutes, possibly sooner,” I was told, before I even asked. In fact, it took 33 minutes — and the tea wasn’t what I’d asked for. (I called and was told the kitchen was out of green tea. I wish I had known sooner.) My other quibble: a ticket from the kitchen was sitting right on the omelet. But the eggs and the accompanying potatoes were delicious, if pricey at $39.24.

The lobby, with a million-dollar shark tank, is the least interesting of the hotel’s many public spaces. Other hangouts include the roof bar called Plunge with an adults-only pool that appears to hover over the ocean. (There’s also a family pool on the third floor.) A nightclub called Louis has a mild S&M theme. Hungry? There’s Cafe Bustelo, offering light fare till midnight, and Philippe, an upscale Chinese restaurant. Also open until midnight is the 42,000-square-foot gym, with access to another pool and an atrium that looks like the interior of the “I Dream of Jeannie” lamp. Hotel guests can use the gym for $15 (outsiders pay $50).

In a city filled with trendy hotels, Gansevoort South has managed to distinguish itself with its rooftop pool, spectacular gym and unusually large rooms, which start at $295 in winter. Gansevoort South, 2377 Collins Avenue, Miami Beach; (305) 604-1000;